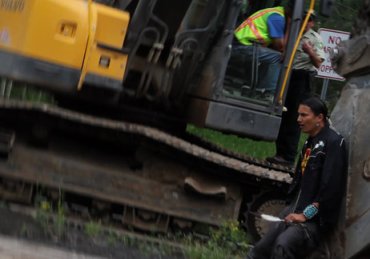 Navajo activist Klee Benally chains himself to an excavator on the San Francisco Peaks, which he and 13 tribes consider sacred. Ethan Sing

We are encouraged to see more coverage of these important cultural-ethical issues:

The Paris auction of 27 sacred American-Indian items earlier this month marks just the latest in a series of conflicts between what tribes consider sacred and what western cultures think is fair game in the marketplace.

Earlier this year, Leigh Kuwanwisiwma, director of the Hopi Cultural Preservation Office, said “To see the art market driving this kind of behavior, it’s not just distressful to the Hopi people, it’s a hurt that I don’t believe people can really understand.”

The auction wasn’t the first such sale and probably won’t be the last. The Hopi Tribe with the help of a Survival International attorney have tried to stop the last two Paris auctions. But so far they haven’t been successful.

For one, France doesn’t have laws protecting ceremonial items like the U.S. But also worldwide — the U.S. included — there is a difference in understanding of what counts as sacred.

Gregory Annenberg Weingarten, vice president and director of the Annenberg Foundation, helped arrange the purchase at auction of 24 sacred objects to return them to their rightful owners, the Hopi and San Carlos Apache tribes. (Earlier this week, The New York Times published a fascinating tick-tock about how the Annenberg Foundation purchased the objects).

Weingarten was “struck by the awesome power and beauty of these objects.” But, he said in a press release, “these are not trophies to have on one’s mantle.”

Rebecca Tsosie, a law professor at Arizona State University, says “when an indigenous nation such as the Hopi Nation says these items are alive, they have an essence, they have a being, one should suspend Western judgement and say, ‘you know what if they believe that, it’s our duty to respect that belief.’ ”

Many tribes have run into this problem when it comes to sacred land. The issue came to a head for 13 tribes outraged by the idea of the Arizona Snowbowl in Flagstaff making snow out of reclaimed wastewater on a mountain they consider sacred. In 2008 the 9th Circuit Court of Appeals ruled that making artificial snow, while offensive, posed quote “no substantial burden” on the tribes’ exercise of religion on the San Francisco Peaks. Today, treated wastewater is pumped several miles up the mountain to make snow.

“Part of our slogan has been ‘what part of sacred don’t you understand?'” said Klee Benally, a Navajo activist who has protested against the practice of pumping treated wastewater several miles up the mountain to make snow. “Essentially we’re saying why isn’t it enough for us to say a site is sacred and should be set aside and protected and respected because it’s integral for our spiritual practice to be continued.”

“It’s something that worries me all the time,” Benally said. “When I pray or participate in ceremonies, I question the effectiveness of those prayers.”

Lands held sacred by Indian tribes are coming under threat as pressure grows to create jobs in rural areas. Many tribes are private about their traditions and reluctant to map their holy ground, so it is hard to know how much land is actually considered sacred…

2 thoughts on “What Part Of Sacred Is So Difficult To Understand?”