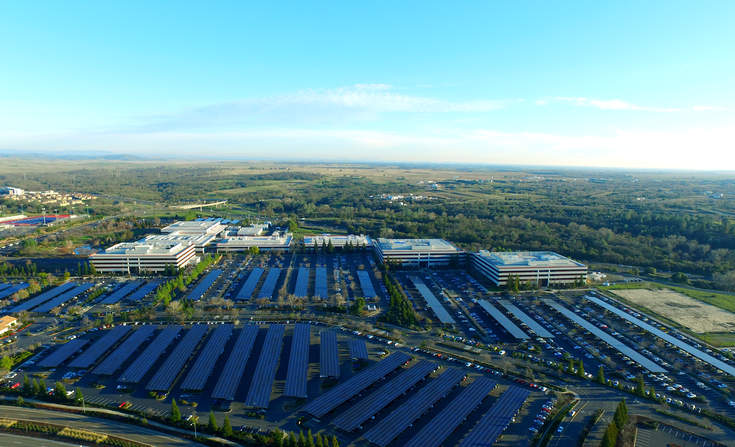 At peak production, Intel’s new solar carport can carry half of the campus’ electricity demand. Photo by Intel via GreenBiz

Businesses are finally seeing the sense of clean energy, which we try to share about as much as possible when it comes to savings and renewables or alternative sources. Heather Clancy at GreenBiz reports on the use and investment of clean energy by several big US businesses, like GM with landfill gas, Intel with solar panels, and Google with renewable energy contracts:

Despite uncertainty surrounding the future of the Clean Power Plan and contractual nuances that make even the smallest project feel unnecessarily complex, big businesses seem more committed to renewable energy than ever.

“This time it’s not about fashion, it’s about real economics, about real business opportunity,” said economist Mark Kenber, CEO of the Climate Group, during a keynote interview at last week’s GreenBiz 16 conference in Scottsdale, Arizona.

Climate Group is one the organizations driving the RE100 initiative, which encourages organizations to use renewable generation sources for all of their energy needs. At last count, 56 companies had signed up, including new-ish supporters BMW and Coca-Cola. “I think that very few of the RE100 companies are making their investment contingent on policy. … They’re making investment decisions based on what they see over the short, medium and long term.”

Every month heralds new tales of one-upmanship and ingenuity. In mid-February, for example, Intel switched on a solar carport at its Folsom, California, campus capable of accommodating almost 3,000 cars, motorcycles and other vehicles. At peak production, the installation can cover about half of the campus’ electricity needs. Put another way, the chipmaker’s total on-site generation capacity is now about 8.7 megawatts, among the top 10 in the United States.

Intel is the perennial leader of the Environmental Protection Agency’s Green Power Partnership list. The chipmaker “buys” enough clean energy courtesy of various on-site projects, utility contracts, and renewable energy credit (REC) purchases to cover 100 percent of its annual demand. Ironically, Intel isn’t even part of the RE100 pledge. At least not yet.

Read the rest of Clancy’s article for GreenBiz, including information on household names like GM, Home Depot, and IKEA, here.