Green is not the first color I associate with Baja California Sur and as the coastal outline slowly became clearer through my plane window I was stunned by the vibrancy of color I was witnessing. The “rainy” season of Baja, which only means a few inches of rain in a span of three months, had transformed the dry, craggy landscape into a verdant, blossoming oasis. In my previous trip to Baja, I had been informed of this phenomenon but I was unprepared, nonetheless, for the volume of greenery and pop of pink and blue flowers.

As we started our drive to Villa del Faro, we encountered the effects of a brief shower in the desert when we stopped behind a line of trucks and cars waiting to cross through an arroyo. The crossing, typically dry and flat, now had muddy dips and brown puddles from the wear of cars traversing after a rain. Low clearance cars skidded sluggishly through the puddles, while the trucks and 4×4 vehicles splashed by effortlessly. 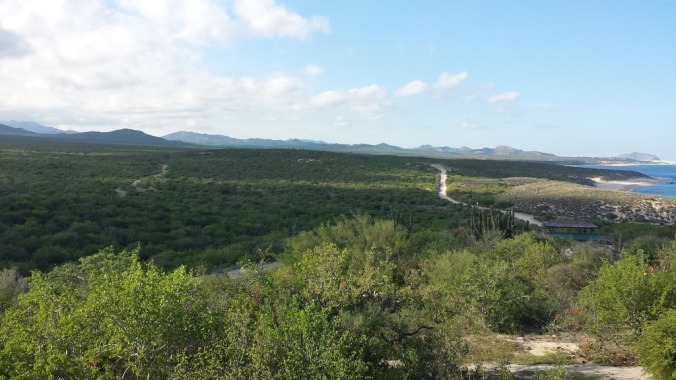 Once we passed the arroyo and were driving through the roller coaster-esque road, I noticed a change in the sky. The cloudless, cerulean blue skies of the summer now showcased a myriad of cloud formations, some of which were dark and signaled the looming rain in the mountainous distance. In the few days since my return, rain has been kept at bay (figuratively speaking) but I am certain that the gray clouds will not hold off for much longer.