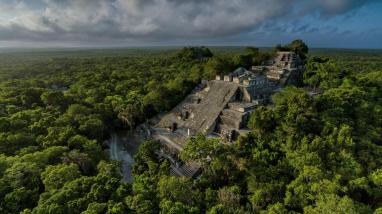 Discoveries in the lands once populated by the Maya continue apace. As Chan Chich Lodge completes three decades of archeological exploration, the wonders of three millennia are uncovered. The stories that capture my interest the most, related to the Maya, are about the man-nature relationship.

For example, Erik Vance’s story from last year. I remember thinking that it was the best article I had ever read in National Geographic. Partly, the graphics are better, if that is possible, than the typically excellent quality the magazine is known for. Also, the topic is more topical for me now. Chan Chich Lodge is situated exactly where the o in Holmul is on the map to the left. The lodge’s Maya foundations are situated at the periphery of where the snake kings once ruled.

And we now have an ethnobotanical initiative linking Maya foodways to our surrounding nature conservation. That initiative is linked to the lodge’s food program, with some high expectations related to our abundant forests. But mainly, with regard to this article, the writing illuminating the topic is excellent:

…Two warring city-states were locked in perennial conflict, grappling for supremacy. For a brief period one of those city-states prevailed and became the closest thing to an empire in Maya history. It was ruled by the Snake kings of the Kaanul dynasty, which until just a few decades ago no one even knew existed. Thanks to sites around this city-state, including Holmul, archaeologists are now piecing together the story of the Snake kings…

Masks from the tombs at Calakmul were meant to ease the passage of the Snake elite into the next world. Royal visages made of green jade, more valuable than gold to the ancient Maya, evoked the annual agricultural cycle and regeneration. CONACULTA, INAH, MEXICO (BOTH) PHOTOGRAPHED AT (LEFT TO RIGHT): NATIONAL PALACE, MEXICO CITY; MUSEO DE SITIO DE COMALCALCO, MEXICO

One thought on “Snake Kings And Other Discoveries”