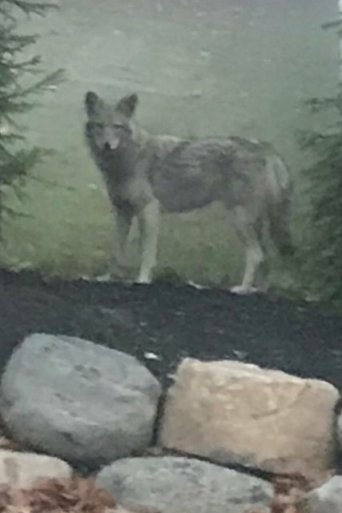 Thanks to the New York Times for the local story follow-up to yesterday’s Yale360 globally-generalizable item on a related theme (click here or on the image to the right to go to the source):

CONGERS, N.Y. — Of all the coyotes that roam Dr. Davies Farm, looking for prey on this apple-picking orchard less than an hour from New York City, manager James Higgins says one of the pack stands out: Bigger and with more gray fur than its mates, this wolflike canine is a reason, Mr. Higgins says, there are fewer deer nibbling at Dr. Davies’s stock.

“We love having him here,” Mr. Higgins said as he drove around the property on an ad hoc coyote safari. There were no sightings, but Mr. Higgins ventured a profile of the creature: aloof, calm, uninterested in people.

“Anytime he sees any kind of human activity, he bolts,” Mr. Higgins said. “As long as he stays in his space and we stay in ours, everyone works in harmony.”

Not everyone shares Mr. Higgins’ fondness for this supposed hybrid predator, known by some as coywolves, which have spread from upstate to semirural New York and the New Jersey suburbs, and migrated as far into the city grid as Rikers Island and La Guardia Airport — where officials had one pack euthanized in November 2016 over the objections of animal-rights activists.

Some who admire the creatures balk at the portmanteau name.

“The word ‘coywolf’ is kind of freighted, and frankly most wildlife biologists prefer the term ‘Eastern coyote,’” said Christopher Nagy, a wildlife biologist and co-founder of Gotham Coyote, a New York City-based research project studying the animals in their new habitats. “Because these buzzwords have an impact, and the word ‘wolf’ is one of the most loaded in nature.”

But the name has caught on as the debate intensifies over whether to try to drive them out or let them be, and it is being bandied about in places like Clarkstown, the Rockland County municipality that includes Dr. Davies Farm.

“There’s a reason we say ‘cry wolf,’ ” Patricia McCoy-Coleman, Clarkstown’s animal control officer, said. Yet even she is willing to apply the moniker to the right coyote. Ms. McCoy-Coleman calls one that she sees around town “Frankenstein” — “Frankie,” for short — because of its odd proportions. “He has a head that’s very big for his body, and it looks like someone put different parts together,” she said…