Nearly one month ago, Vox launched a new way for us to source stories. We have sourced from their website when the story fits our mission. For us to scan the news daily and link to at least one article or book review or other media that seems consistent with our mission, we increasingly bump up against the fact that producers of and channels for accessing relevant information seem to be increasing faster than we can possibly keep up.

Today we sampled from their sonic venture, a story about changes way up north, wrought by climate change, geopolitical ambitions, head in the sand-ism and other intrigue. Finding an episode like this one stretches our horizons in a healthy, productive manner:

There’s a new Cold War being fought in the North Pole between the United States and Russia (but also China, Finland, Norway, Canada, Greenland and more). Fueling the battle is the melting Arctic, which just had its warmest winter in recorded history. Vox’s Brian Resnick gives us the science before Yochi Dreazen takes us to the war.

It must also be mentioned that having outlets we trust recommend other outlets is a must. And here is an example of one we appreciate:

“Today, Explained”: An Edgy New Vox Podcast to Compete with “The Daily” 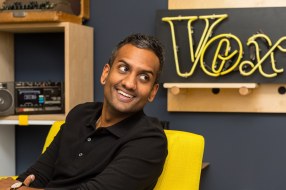 Podcast-wise, 2017 was arguably the year of “The Daily,” the beautifully produced, gently voiced narrative-news offering from the Times, hosted by Michael Barbaro, which started last January and quickly became indispensable. The show, which parses a different news story in each episode, through a conversation with a reporter or other guest, then delivers a brief news roundup, has sufficient perspective and empathy that it produces in its listeners an intoxicating, if temporary, feeling of sanity; by now, its theme song alone cues in me a Pavlovian calm. The show garners 4.5 million unique listeners each month; in April, it will expand to public-radio syndication.In September, at Third Coast, the audio-producers’ conference in Chicago, near-swooning occurred as Barbaro riffed on “The Daily” over breakfast. Though the show is expensive to produce, it’s been highly profitable, and its success seemed to portend that a competitor would eventually emerge. Shortly after Third Coast, one did: Vox announced a forthcoming daily narrative-news show, “Today, Explained,” hosted by one of public radio’s rising stars, Sean Rameswaram, thirty-three, of the excellent “Radiolab” spinoff “More Perfect.” At the conference, I’d been impressed by Rameswaram’s sharp, funny seminar on how to sound natural on tape (answer: by writing for your own voice, not for the way you think you should sound) and by his d.j.ing at the conference-closing dance party, which found a balance between challenging and inclusive. He seemed poised for big things. When I read the Vox announcement, I thought, Ooh—the plot thickens.

Vox, the news-and-opinion site co-founded in 2014, by Ezra Klein, Melissa Bell, and Matthew Yglesias, aims to explain the news. It does this via text, videos, and podcasts, to varying degrees of success. “Today, Explained,”a co-production of Vox and Stitcher, began in February and quickly distinguished itself in a few key ways. “The Daily” comes out in the morning, and has a mood of sober, even sombre, innocence; “Today, Explained” comes out in the afternoon, when we have been fully immersed in the world and its mayhem, have no illusions, and might need a laugh. It might be said to address our what-the-hell-just-happened feeling. Right out of the gate, the podcast sounded comfortable and confident; you heard it and thought, Maybe we do need an alternate version of “The Daily.”

In the trailer, Rameswaram explains, “We want to answer all those questions you’ve been asking yourself, like, Why doesn’t Puerto Rico have power yet? Or, What would a war with North Korea even look like? Or, If people keep walking out of the E.P.A., what happens if there’s another Deepwater Horizon?” He promises us answers to such questions, and context, and “radio drama, maybe even a song.” Then we hear a song in which a woman sings, “We’re gonna drop it for the dinner bell every afternoon”; a faux-scary voice says, “Not on weekends.” It rhymes the line “The news it comes fast, so we keep it spontaneous” with “Mother[boing] Matt Yglesias.” Over a pleasing groove, sound bites come in, such as James Comey saying, “Lordy, I hope there are tapes.” It feels funny, knowing, and energetic. In this news climate, that isn’t easy.

Twenty episodes in, “Today, Explained” has produced gratifying, intelligently produced shows on subjects we’d reasonably expect it to cover—Parkland teens, nuclear anxiety, the steel industry—and on subjects we might not expect but are grateful for, such as the water crisis in Cape Town and the West Virginia teachers’ strike. It’s serious but not self-serious. Episodes are fifteen to twenty minutes long, shorter if you skip the copious ads for mattresses and toothbrushes. Vox reporters talk to Rameswaram, who occasionally veers into what I think of as the Krulwich zone—exaggerated naïveté for our benefit—but generally he’s a sharp, curious proxy for the listener…