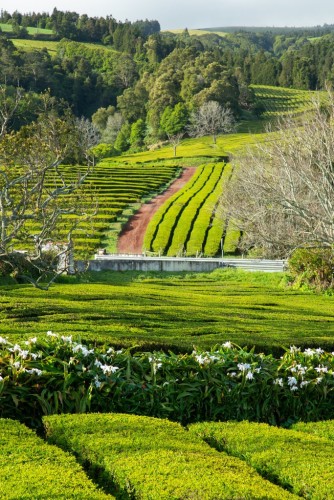 We may have used this post title before, but it’s a feeling we come back to again and again, especially when talking about foods we love. Coffee, cheese, wine, tea…the  significance of each one resonates with both a sense of culture and place to where quite a few of the contributors to this site have called home.

In the Azores, the Menu Includes Coffee, Tea and Tradition

There’s wine and cheese too, in these remote islands in the Atlantic Ocean. Here’s where to get a taste of the past — and present.

Living on a remote island at the mercy of nature demands resiliency, and the Azores do qualify as remote: nine volcanic islands in the middle of the Atlantic Ocean, 850 miles off the coast of Portugal, their protectorate. The Azores are known for volcanic craters, natural hot springs, 600-foot waterfalls, mountains, cerulean lagoons and dense forests.

But it has not always been idyllic on the islands. Throughout their history, Azoreans have had to overcome disease, volcanic eruptions, earthquakes and hurricanes that have decimated their food supply and threatened their economy and survival.

But they are masters of reinvention and ingenuity: They have learned how to cultivate tea and coffee, plants that are not native to the islands but flourish in the temperate climate and mineral-rich volcanic soil. They have also preserved and perfected centuries-old traditions in cheesemaking and wine production to ensure sustainability and safeguard their culture. They proudly share their agrarian heritage with travelers seeking an authentic Azorean experience.

I had to walk briskly to keep up with 66-year-old Manuel Nunes. He climbs the hillsides of his coffee farm with the sure-footedness of a ram, easily negotiating the rocky terrain. His muscular fingers are adept at plucking the beans swiftly from their stems. He will dry them in the sun and roast them on his stovetop in a cast iron pan, to sell as beans and to serve as coffee at Café Nunes in Fajã dos Vimes, a village of 70 people on São Jorge Island.

Mr. Nunes’ tiny farm is the largest plantation in Europe, with 700 plants yielding approximately 1,600 pounds of coffee annually — tiny when compared to major coffee-growing countries. The low altitude coupled with high humidity makes this microclimate ideal for growing arabica coffee. There are no insects on the island that destroy the beans so no chemicals are required. The result is a strong cup of Joe without acidity. Mr. Nunes does nearly all the work himself, including the long harvest from May to September.

“It’s what I love to do. It’s my passion. It’s where I belong. I feel well here,” he said (his daughter, Dina Nunes, did the translating)…

Queijaria Canada is a small, family-run cheese factory in the farming village of Santo Amaro on São Jorge Island. The enterprise has one vat that is filled with fresh milk twice a day by João Silveira after he milks his cows. His mother, Graça Silveira, separates the curds and whey. Her husband and João’s father, Manuel Silveira, presses the curds into round molds to give the cheese its shape. After 48 hours, the molds are removed and the cheese is stored on crude wooden shelves to cure for 60 days.

Manuel Silveira is a third-generation cheesemaker. He produces only one type, called Canada, a semihard, spicy cheese with a buttery tang similar to other cheeses produced on São Jorge. He sells about 3,700 pounds a year to restaurants and specialty stores on the other islands, in Portugal and at his dairy’s shop, where visitors can sample the cheese and see it being made.

“If you go to a restaurant here or on another island, they will ask if you want the cheese of São Jorge or if you want the normal cheese,” Mr. Silveira told me (Dina Nunes again did the translating). “Normal cheese” in this case means whatever brands have been imported.