100 life-size lantana replicas of wild elephants will travel across three continents spreading the message of peaceful coexistence with nature.

The beautiful herd of Asian Elephants calmly drinking from this watering hole poses no threat to any onlooker. They’re actually sculptures made from the invasive lantana, introduced to the Indian subcontinent as an ornamental shrub by the British. The harmless looking plant is a scourge to native flora, animals and people of the regions where it’s taken over, as it literally poisons its surroundings so nothing else can survive there, destroying the natural biodiversity of the area. 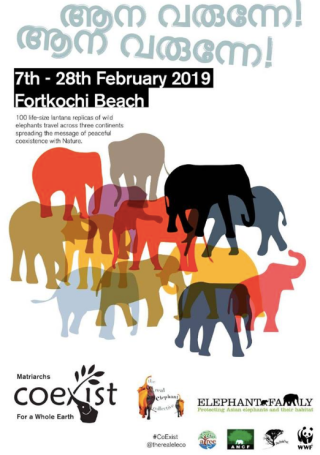 30 of these extraordinary, life-sized works of art have been on display in Kerala, at Kochi’s South Beach, coinciding with the Kochi-Muziris Biennale. The outdoor exhibit, entitled Co-Exist: Matriarchs for a Whole Earth, is on display for only until the end of February, after which it will travel to Bangalore and New Delhi. In 2020, the elephant models will be taken to England where they will be displayed at the Victoria and Albert Museum and the Royal Parks, both in London. In 2021, they will travel by truck across the USA, where they will finally be auctioned, the proceeds of which will go to preservation of wild animals.

The project is a collaboration between multiple organizations, designers and indigenous community artisans. Members of the Ashoka Trust Trust for Research in Ecology & the Environment (ATREE) devised a way to safely craft with lantana as a raw material and support for the making and display of lantana elephants is through the NGOs Elephant Family, The Real Elephant Collective (TREC), and The Shola Trust.

Fort Kochi To Have 100 ‘Lantana’ Elephants. And Here’s Why You Need To See Them

Highlighting the cause of nature and wildlife conservation at a global scale, the Lantana elephants are part of a greater initiative to raise funds for conservation and help people and elephants live together more harmoniously.

On February 7, if you are wandering around the popular South Beach in Fort Kochi, you are sure to come across a magnificent herd of 100 Asian elephants.

If you are wondering about the possibility of such a huge congregation of these beings at one place, let us break the news.

These are beautifully sculpted life-size elephants that have been made by tribal artisans from Thorapalli in Gudalur using Lantana camara or Lantana, a toxic invasive weed.

Lantana elephants are part of a greater initiative to raise funds for conservation and help people and elephants live together more harmoniously.

“Our vision is to bring Asia’s elephants and the issues they face out of India and the shadow cast by the African ivory crisis. With Asian elephants numbering only a tenth of their African counterparts, the importance of this unique migration cannot be underplayed. The survival of a species is at stake,” says Ruth Ganesh, principal trustee and the creative force of Elephant Family.

She had conceptualised the Lantana herd along with Shubhra Nayar of TREC. Modelled on real elephants from the Gudalur-Pandalur region, in its bid to raise awareness and funds for the conservation of Asian elephants, this unique project is also clearing the harmful Lantana from the Nilgiri forests while providing livelihoods to about 70 artisans from the Paniya, Bettakurumba and Soliga communities.

With their inherent knowledge of wild elephants and their exceptional crafting skills with Lantana, these artisans are bringing life to the elephant forms, while earning a dignified income. The elephants are designed by Shubhra Nayar and Tariq T of TREC, with Subhash Gautam overseeing the process. 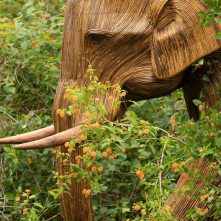 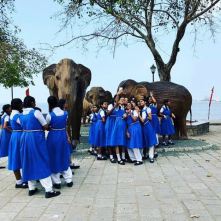 Part of the herd

“Lantana encroachment has a negative impact on the regeneration of native flora, fodder and also non-timber forest products. It pushes animals out of forests, causing crop damage for local people, with a huge negative impact on livelihood of the indigenous communities. This project provides them with a livelihood opportunity and also gradually clears the forests from Lantana,” says Dr. Siddappa Setty, a fellow at ATREE.

This magnificent herd will stay in Kochi for about a month and then travel across the world to be part of exhibitions at different locations for auctioning.

The proceeds will be routed to a newly created Asian Elephant Fund that will be governed by a panel of elephant specialists in Asia.

Read more about the project and see photos of the artisans at work here.