Plastic bottles bundled in a recycling facility. Bales such as these travel around the world on shipping containers. Photograph: Bloomberg via Getty Images

Thanks to the Guardian for this series on plastic waste management. It is not pleasant reading, but it should motivate change:

What happens to your plastic after you drop it in a recycling bin?

According to promotional materials from America’s plastics industry, it is whisked off to a factory where it is seamlessly transformed into something new. 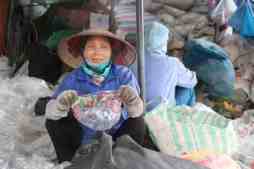 Nguyễn Thị Hồng Thắm is paid $6.50 a day to sort recycling on the outskirts of Hanoi. Photograph: Bac Pham/The Guardian

This is not the experience of Nguyễn Thị Hồng Thắm, a 60-year-old Vietnamese mother of seven, living amid piles of grimy American plastic on the outskirts of Hanoi. Outside her home, the sun beats down on a Cheetos bag; aisle markers from a Walmart store; and a plastic bag from ShopRite, a chain of supermarkets in New Jersey, bearing a message urging people to recycle it. 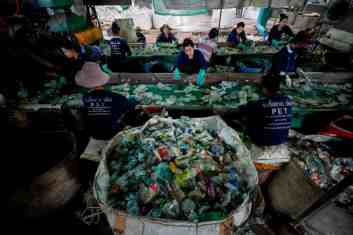 Tham is paid the equivalent of $6.50 a day to strip off the non-recyclable elements and sort what remains: translucent plastic in one pile, opaque in another.

A Guardian investigation has found that hundreds of thousands of tons of US plastic are being shipped every year to poorly regulated developing countries around the globe for the dirty, labor-intensive process of recycling. The consequences for public health and the environment are grim.

A team of Guardian reporters in 11 countries has found:

These failures in the recycling system are adding to a growing sense of crisis around plastic, a wonder material that has enabled everything from toothbrushes to space helmets but is now found in enormous quantities in the oceans and has even been detected in the human digestive system.

Reflecting grave concerns around plastic waste, last month, 187 countries signed a treaty giving nations the power to block the import of contaminated or hard-to-recycle plastic trash. A few countries did not sign. One was the US.

A new Guardian series, United States of Plastic, will scrutinize the plastic crisis engulfing America and the world, publishing several more stories this week and continuing for the rest of 2019.

“People don’t know what’s happening to their trash,” said Andrew Spicer, who teaches corporate social responsibility at the University of South Carolina and sits on his state’s recycling advisory board. “They think they’re saving the world. But the international recycling business sees it as a way of making money. There have been no global regulations – just a long, dirty market that allows some companies to take advantage of a world without rules.”