Watching a flock of swifts power and zoom all over the sky in Cornwall, I realized that the feeling of being trapped by the coronavirus is not just about wanting to be somewhere else—it is about wanting to escape this time entirely. Photograph from Alamy 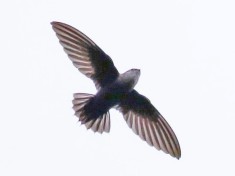 Costa Rican Swift. Chaetura fumosa. Smallest swift in most of range. All dark gray with contrasting pale rump and paler throat, both of which can be difficult to see in many viewing conditions. A good look at the rump is necessary for a firm visual identification, otherwise Vaux’s Swift can look very similar. However, in some parts of its range (the Osa Peninsula, for example) this is the only small Chaetura swift. Makes twittering calls similar to many other swifts. Usually found in flocks over forests and more open areas.

I am not even the second birdiest member of our family. I enjoy birding events and join the fun from time to time. Apart from such events I do not travel specifically for birds, even the one to the right.  We see it on occasion and it is a particular pleasure. Not as thrillingly colorful as a scarlet macaw, nor as resplendent as a quetzal, but it is part of a famed family of birds. The essay below explains why. In Costa Rica the airports will be opening up again on August 1. Until then, and still for the foreseeable future, tourism is primarily locals going on weekend outings. Birding is usually thought of as a motivator for foreigners visiting Costa Rica–especially those from the UK–but now is an activity appreciated by more locals than usual. Sam Knight‘s perspective from the UK, where tourism is also primarily local currently, can be especially well appreciated from our vantage point in Costa Rica:

Letter from the U.K.

Swifts and the Fantasy of Escape

On July 17th, I drove out of London for the first time since the start of the pandemic. The last time I had seen a field or sensed a broad horizon was four months earlier, when we escaped the city in the early days of the coronavirus, feeling faintly ridiculous, to celebrate my daughter’s third birthday with an Easter-egg hunt on a quiet country lane. Last week, I was taking my daughters to stay with their grandparents for a few days, in the town of Helston, in Cornwall. It’s about three hundred miles from London—no great shakes by U.S. standards but about as far as you can drive in England without crossing into Scotland or falling into the sea. We left at 5:30 a.m., heading west, and arrived in Helston in the early afternoon. It’s hard to describe the effect of movement after being confined in a dense urban neighborhood for so long. The monotonous walks to the shitty park. I felt like I was being unpeeled. As we stood in my mother-in-law’s garden, in the bright July sun, a party of swifts, tipping from right to left, their long wings like blades, came over our heads and spiralled higher and higher into the sky, screaming.

Swifts live on the wing. Each year, they fly the equivalent of five loops around the Earth. Their family name, Apodidae, means footless in Greek, because for a long time people thought they didn’t touch the ground at all. In the Middle Ages, swifts were an inspiration for the martlet, a heraldic symbol for fourth sons with “no footing in the ancestral lands,” according to the Oxford English Dictionary—men of restlessness and adventure. The common swifts that come to Britain fly from sub-Saharan Africa, where they spend nine months of the year. They migrate in a parabola, wintering as far away as Mozambique, fuelling up in Liberia, and then bolting high along Africa’s Atlantic shoreline into Europe, or cutting straight across the Sahara, if they prefer. A few years ago, the British Trust for Ornithology put a geo-locator on a swift and found that it had flown three thousand miles in five days.

Swifts feed and mate in the sky. They drink by swooping on still water. To wash, they slow down and glide through rain. They sleep by closing one eye, and half of their brain, at a time. In 1948, David Lack, an ornithologist at the University of Oxford, and his wife, Elizabeth, began watching the swifts that nested in the tower of the university’s natural-history museum. They found that the swifts spiralled up into the sky at dusk and returned at dawn. In “Swifts in a Tower,” Lack’s study, he quotes a French pilot from the First World War, who found himself surrounded by sleeping birds while flying by the light of a full moon, ten thousand feet above Vosges: “We suddenly found ourselves among a strange flight of birds which seemed to be motionless, or at least showed no noticeable reaction. They were widely scattered and only a few yards below the aircraft, showing up against a white sea of clouds underneath.”

One of the psychological effects of the pandemic has been the strong desire to be elsewhere. At the height of Britain’s outbreak, in the spring, I longed to be in Germany, or Greece, or New Zealand, or any place where the coronavirus had not arrived or was being better handled. It was unnerving to be stuck fast in the borough of Tower Hamlets, in East London, which had one of the highest death rates in the country. Thirty-five people died in Bow, our neighborhood.

Since June, Britain’s lockdown has gradually eased. On July 4th, hotels, pubs, and restaurants reopened, and the government has been encouraging citizens to get out, spend, and go on vacation in the United Kingdom. “This is a great, great year for people to take a staycation,” Boris Johnson, the Prime Minister, said recently. “I’m certainly going to be doing that.” But it’s not an easy time to circulate. Communities and towns that have been spared are wary of the infecting hordes. Cornwall receives more than four million visitors a year. It has fifteen intensive-care beds. When I arrived last week, my mother-in-law told me that a local farmer had taken to challenging people who were walking down to a beach that we know and asking them where they were from. In the evening, I went to a supermarket on the edge of Helston, to buy some food for the children, and was the only person wearing a mask. By their masks, ye shall know them…