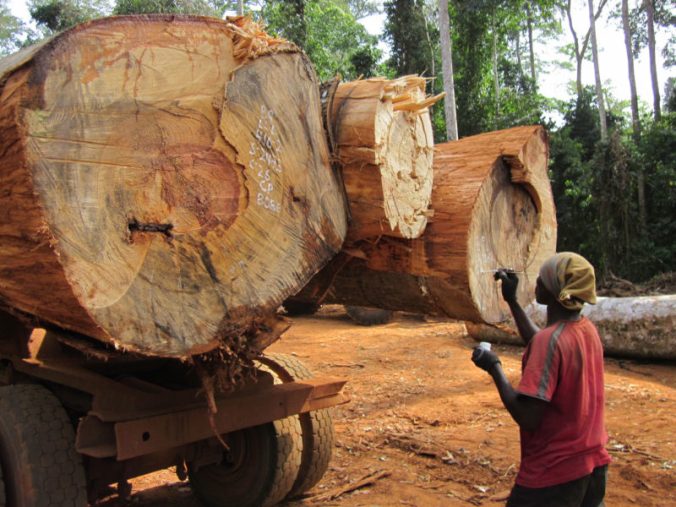 A local logger marks wood for transit to a milling facility in Ghana. MARIEKE WIT/TROPENBOS INTERNATIONAL

There was a time, just a few decades ago, when small, nimble groups of loggers in remote tropical forest areas–including here in Costa Rica–were considered a serious threat. They knew the lay of the land because they were local, and could get in and out of primary forests with valuable tree trunks, often without being detected. Thanks to reporting by Fred Pearce we can see where and how perspective has changed on this part of the forestry value chain:

How Small-Scale Loggers Can Help Save Africa’s Tropical Forests

Small-time loggers providing timber to local villages have long been seen as a threat to forests in Africa. But that view is changing, as evidence mounts that these communities can be better forest protectors than the governments that are sanctioning large-scale commercial operations.

The man with the chainsaw paid the farmer $50, as his gang climbed a hillside in western Ghana. The gang passed coffee fields until they came to a giant hardwood tree. The farmer, who was pleased to have the money in his back pocket, watched as as the gang cut down the tree and used the chainsaw to dismember it deftly into quarters and then into crude planks.

The loggers left behind little more than a pile of sawdust, as they put the planks on their heads and walked the half mile back to the roadside. From there, later that day, trucks would pick up the planks, transporting them either to a local timber market or to one of the dozens of furniture workshops between the forest and the Ghanaian capital, Accra.

You can witnesses such scenes almost anywhere in the surviving forests of tropical Africa. The work of local chainsaw loggers meeting local timber needs is a hidden harvest, often illegal and rarely included in national forest or economic statistics. Many regard the gangs as the biggest threat to forests in many countries. Environmentalists have called for a crackdown.

But there are growing doubts among both environmental and development activists about whether this ostracism is fair to rural communities or a sensible approach to forest conservation. After all, it demonizes poor artisans who supply local markets and bring economic benefits to remote villages — and whose environmental impacts are generally much less than those of legal, state-sanctioned commercial logging operations that supply export markets…