Thanks to Mary Robinette Kowal for this very brief note from history demonstrating how the need for caffeine was the mother of invention:

The first patented invention made in space was a coffee cup.

In November 2008, Donald Pettit wanted to drink his tea and coffee from an open vessel. 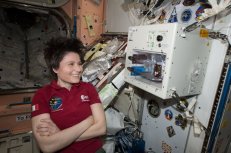 While aboard the I.S.S., he tore out a plastic divider from his Flight Data File and used the magic of fluid dynamics to create an open cup. Until then, astronauts drank everything out of a plastic bag with a straw.

We interact with coffee through aroma as much as through taste. In a bag, half of the experience was gone; Dr. Pettit said that he wanted to add “back the dimension of what it’s like to be a human being.”

When Samantha Cristoforetti, the first Italian woman in space, went to the I.S.S., the Italian Space Agency in collaboration with Lavazza and Argotec, built a zero-g espresso machine, the ISSpresso. To save her from drinking espresso in a bag, Mark Weislogel, an engineer at Portland State university, designed a true ‘zero-g cup’ based on Dr. Pettit’s invention.

In 2015, as Dr. Kjell Lindgren was preparing to launch for NASA, he had concerns about coffee.

“I love coffee and I was worried that our standard freeze-dried brew wasn’t going to cut it,” he said…

3 thoughts on “Coffee In Space”