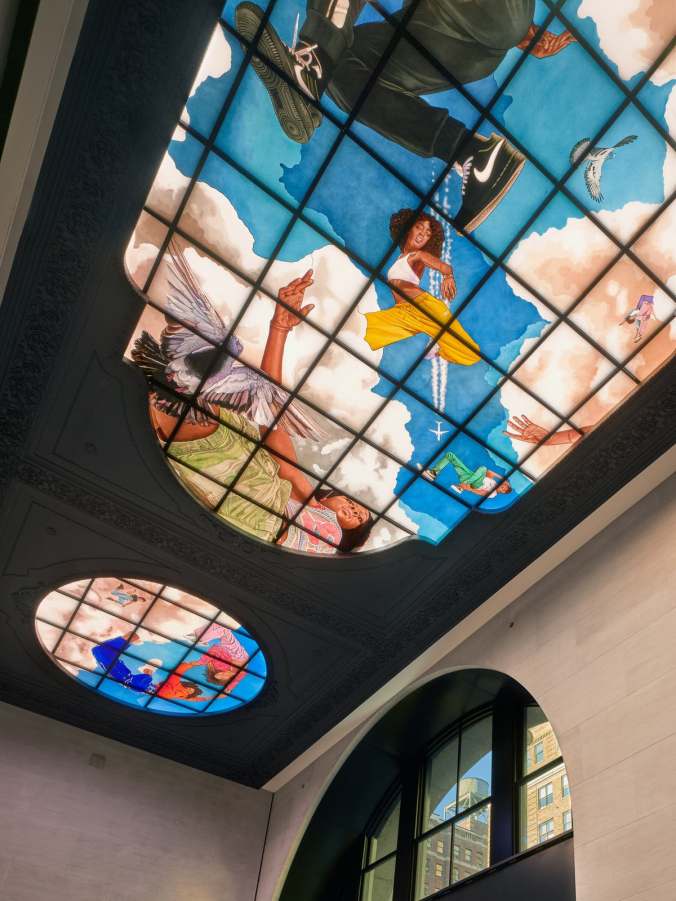 In the mid-1980s we lived a few blocks south of Penn Station, and avoided it studiously. If I could right now, I would rush to see it, thanks to Ian Volner’s essay below. I recommend reading it in full because it is neither puff piece nor fashion statement, but a comment on important issues of our day. Like the two essays I referenced earlier by Casey Cep, this essay makes me believe in the importance of this project, as if the project itself is a public statement of intent. The description of the stained glass mural was more than sufficient, but still I had to find an image of it (the one above is from a review I missed a few weeks ago in the New York Times).

The film noir “Killer’s Kiss,” from 1955, is an almost perfect dud. But because it was filmed on location in New York—and because its director was a twenty-seven-year-old photographer named Stanley Kubrick—it’s worth watching for the first scene and the last, which occur in the same place: the passenger concourse of the original Pennsylvania Station in Manhattan, where the protagonist, having escaped from shadowy thugs, waits impatiently for his lover. Kubrick captures the hero from a low angle, and, overhead, the arched trusses holding up the station’s glass-and-iron roof seem impossibly high. The building looks very dirty, but the ambient soot in the air catches the sunshine as it streams down from above, making the light appear more abundant, almost solid.

A little more than a decade after the film’s release, all this would be gone. The old structure, created by the firm McKim, Mead & White and opened to the public in 1910, was bulldozed to make way for the current Penn Station-Madison Square Garden complex, designed (if that’s the word) by the businessman and architect Charles Luckman. Save for the name, the two Penn Stations share nothing: the McKim, Mead & White design—with a main waiting room partly based on the early-fourth-century Baths of Diocletian, in Rome—packed two city blocks with lofty columns, coffered ceilings, graceful arcades, and, of course, all that splendid natural light. Its successor, as generations of weary travellers know, is a kind of underground people extruder—a literal tomb for twentieth-century American design, the place where the great architect Louis Kahn died in 1974, alone, in the men’s room. For many critics, historians, and lovers of the cityscape, the demolition of the Beaux Arts beauty of Penn Station, starting in 1963, is one of the original sins of New York urbanism, the beginning of the city’s fall from grace.

We’ve been trying to atone ever since, with mixed results. Renovations of Penn Station in the nineties included the addition of murals evoking the old building—a strangely cruel gesture. Luckman died in 1999, and his obituary in the Times noted that plans “are now afoot to redevelop the Garden site.” They had been afoot for years, and they would be for many more. Schemes to get Penn Station out from under the Garden’s concrete boot have been revived and dashed, victims of government parsimony or private intransigence or both. Here in 2021, a global pandemic has dismantled the city’s economy, given all forms of public transit a bad rap, and cast a pall over the notion of public space. Yet even now, at this most unlikely juncture, New York’s new train hall has arrived, more than twenty years behind schedule but somehow right on time.

Moynihan Train Hall, as the new facility is called, occupies the middle slice of the James A. Farley Building, which had been—and partially still is—an iconic New York post office, built in 1912, and also a product of McKim, Mead & White’s studio. The new transit facility, sitting just opposite Madison Square Garden between Eighth and Ninth Avenues, is named for Daniel Patrick Moynihan, the long-serving United States senator from New York who was among the first to suggest the reportedly underused postal building as a suitable alternative to the botched Penn Station. As the senator is said to have observed, “Where else but in New York could you tear down a beautiful Beaux Arts building and find another one right across the street?”…