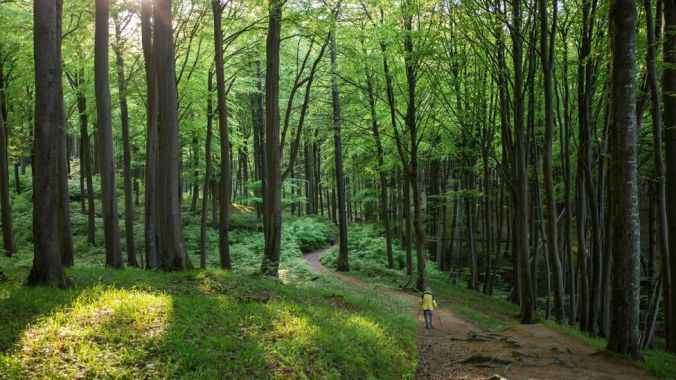 With forest making up around 33% of Germany’s land area, woodlands have become a central part of German culture (Credit: Westend61/Getty Images)

Thanks to the BBC for this article about the Germanic tradition of waldeinsamkeit:

Waldeinsamkeit is an archaic German term for the feeling of “forest loneliness” (Credit: Marco Bottigelli/Getty Images)

Everybody is at it in Germany. They’re doing it in the trees in the Black Forest. Out in the magical Harz Mountains. In the national parks of Bavaria when silhouetted in the moonlight. And in the city centre woodlands of Berlin and Munich. Sometimes when completely nude, too.

This isn’t a story about the sex lives of Germans or any other nationality, though. Instead, it’s an exploration of the country’s little-known love affair with something else entirely: waldeinsamkeit, an archaic German term for the feeling of “forest loneliness”.

Germans have a wonderfully evocative dictionary of words with no direct English equivalent, with several descriptive if melancholic expressions all finding a home in conversation. There is wanderlust (a desire to travel), for instance. Or heimat (an emotional tie to a homeland). Another is fernweh (a longing for far-off places).

Type waldeinsamkeit into Google Translate, however, and the immediate result – “solitude of the forest” – does little to spell out its true meaning: the enlightened, sublime feeling that can come from being alone in the woods. It is a quintessentially untranslatable German word, and yet owing to the Covid-19 pandemic and ongoing national and local lockdowns (of which Germany and its regions have had several), the spirit of waldeinsamkeit as a philosophy is increasingly alive.

With more free time, more flexibility and more pressure at home, but also fewer alternative pastimes, Germans have sought calm, fresh air and hermit-like solitude in greater numbers than before. There is a palpable yearning – a feeling of a life being half-lived – and it has not gone unnoticed that the country’s restriction-free spruce, conifer, beech, oak and birch forests are busier than ever.