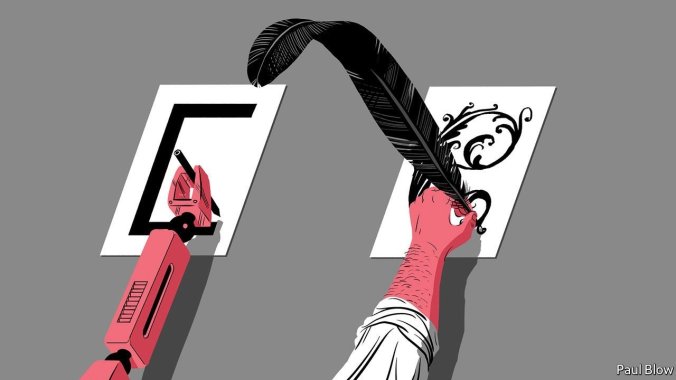 The Economist offers this brief thinkpiece on what to make of the recent uptick in interest in craft-made products (unless you are a subscriber to the magazine you will need to sign up for free limited access to the magazine’s website):

The market for artisan goods is likely to grow. But organised craft could lose its charm

In “THE REPAIR SHOP”, a British television series, carpenters, textile workers and mechanics mend family heirlooms that viewers have brought to their workshop. The fascination comes from watching them apply their craft to restore these keepsakes and the emotional appeal from the tears that follow when the owner is presented with the beautifully rendered result.

Perhaps the idea of craftsmanship is not simply nostalgic. In a new paper in the Academy of Management Annals, five academics examine the idea of crafts as a way of remaking the organisation of work. They define craft as “a humanist approach to work that prioritises human engagement over machine control”. Crafts require distinct skills, an all-round approach to work that involves the whole product, rather than individual parts, and an attitude that necessitates devotion to the job and a focus on the communal interest. The concept of craft emphasises the human touch and individual judgment.

Essentially, the crafts concept seems to run against the preponderant ethos of management studies which, as the academics note, have long prioritised efficiency and consistency. Frederick Winslow Taylor, a pioneer of management studies, operated with a stopwatch and perceived human workers as inefficient, and potentially disobedient, machines. Craft skills were portrayed as being primitive and traditionalist.

The contrast between artisanship and efficiency first came to the fore in the 19th century when British manufacturers suddenly faced competition from across the Atlantic as firms developed the “American system” using standardised parts. Initially these techniques were applied to arms manufacture but the worldwide success of the Singer sewing machine showed the potential of a mass-produced device. This process created its own reaction, first in the form of the Arts and Crafts movement of the late 19th century, and then again in the “small is beautiful” movement of the 1970s. A third crafts movement is emerging as people become aware of the environmental impact of conventional industry.

There are two potential markets for those who practise crafts. The first stems from the existence of consumers who are willing to pay a premium price for goods that are deemed to be of extra quality. This niche stretches all the way down from designer fashion through craft beers to bakeries offering “artisan” loaves.To the extent that automation takes over more sectors, this niche seems likely to become more lucrative; there is “snob value” in owning a good that is not mass produced. The second market lies in those consumers who wish to use their purchases to support local workers, or to reduce their environmental impact by taking goods to craftspeople to be mended, or recycled…

Read or listen to the whole article here.