Whale stories have been in our pages on a regular basis over the last ten years not only because of their charisma. Because of how long they have been on the planet, their future should matter to mankind. The biggest of the species hiding in plain sight is increasingly spotted in ancestral waters, which seems like good news, but read on: 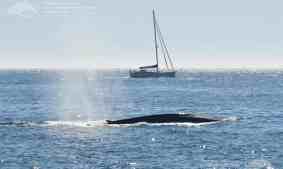 The creatures may have returned to Galicia out of a form of homesickness, or ancestral memory. Photograph: Bottlenose Dolphin Research Institute

Blue whales, the world’s largest mammals, are returning to Spain’s Atlantic coast after an absence of more than 40 years.

The first one was spotted off the coast of Galicia in north-west Spain in 2017 by Bruno Díaz, a marine biologist who is head of the Bottlenose Dolphin Research Institute in O Grove, Galicia.

Another was spotted in 2018, another the following year, and then in 2020 they both returned. Just over a week ago a different specimen was sited off the Islas Cíes, near O Grove.

Díaz said it was not yet clear whether the climate crisis was leading the creatures to change their habits and return to an area where they were hunted almost to extinction.

“I believe the moratorium on whaling has been a key factor,” he said. “In the 1970s, just before the ban was introduced, an entire generation of blue whales disappeared. Now, more than 40 years later, we’re seeing the return of the descendants of the few that survived.”

There was a centuries-old whaling industry and a dozen whaling ports in Galicia. Spain did not ban whaling until 1986, by which time the blue whale was all but extinct in the region.

However, not everyone sees the whales’ return as good news…