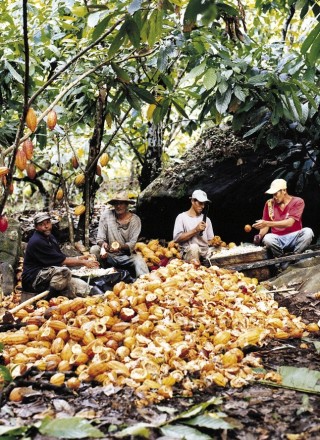 Because celebrating the Easter holiday is now so closely associated with chocolate, I presume, this article from the archives is suddenly front and center at one of our favorite websites. During our time in India I have learned from artisanal chocolatiers about Cadbury, among other big candy companies, who incentivized the removal of the high quality cacao that was growing here, in favor of more economical lower quality cacao. Bummer.

I remember first learning about chocolate from this article (click the image to the right to go to it), and it was worth the time to read it again based on my now-expanded interest in chocolate; also because it is a great story of entrepreneurship; and because Bill Buford is one of the greatest long-form writers on food:

The quest for the perfect bean.

On July 7, 2001, Frederick Schilling and his girlfriend, Tracey Holderman, arrived in New York to attend the Fancy Food Show and launch Dagoba, an organic-chocolate company. Schilling had just turned thirty, Holderman was twenty-nine, and the show was the first entrepreneurial event of their lives. Dagoba had no employees and no orders. It had a lease for a ground-floor industrial space in Boulder, Colorado (the “factory”), and an investment of twenty thousand dollars (borrowed from Schilling’s mother and an uncle), which, after flights, a hotel, and a fee for the smallest possible booth, against a dark wall in the basement of the Jacob K. Javits Convention Center, was gone. It also had “launch products”—seven bars, including infusions of raspberry and mint—an amateurish jamboree, confected and poured into molds by a man who had never liked chocolate, hand-wrapped by a woman who rarely ate more than two ounces a year, and tested only by their Boulder friends and roommates, a scraggly crew of ski bums and folksingers. Dagoba was more bedroom than boardroom. In New York, that changed. END_OF_DOCUMENT_TOKEN_TO_BE_REPLACED