Bonnet macaques are found only in South India, occupying wet lowland to dry deciduous forest, up to a height of 2100 m. They are usually quite sociable and are seen mostly in groups.

This photograph was taken near Kumily close to the lower Camp road side by Mr. Shaji. Bonnet macaques of this area mostly seem to be waiting for travelers passing by in hopes of getting some food or fruits from them. Visitors usually feed them to watch the macaques eat and their funny facial expressions, but actually this is a mistake for both animals and people, and should be discouraged.

END_OF_DOCUMENT_TOKEN_TO_BE_REPLACED 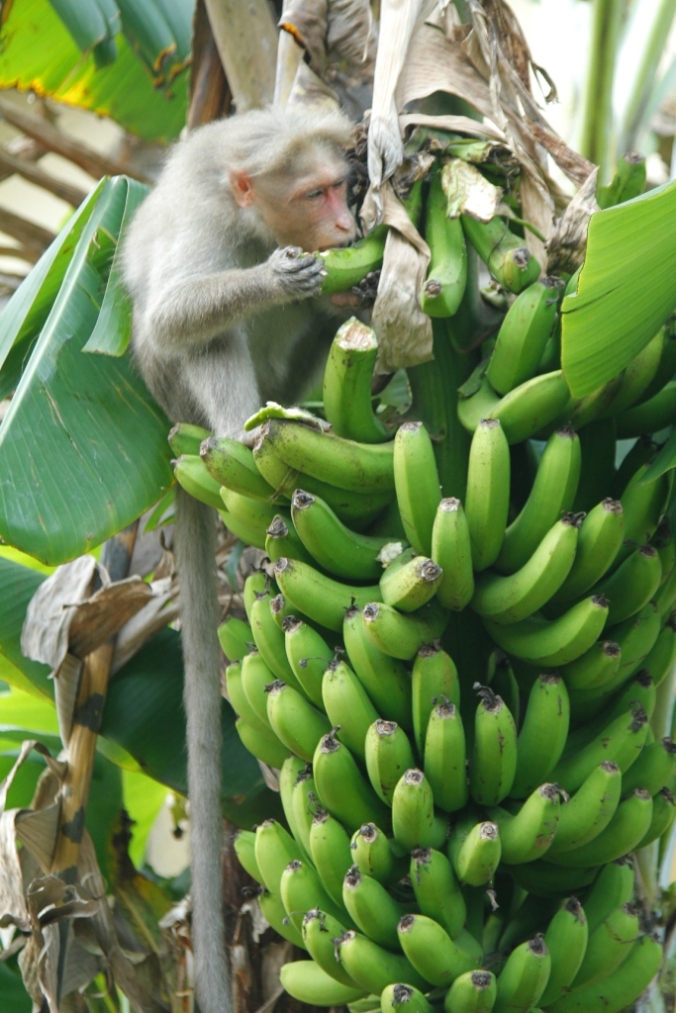 We are sharing our property with frequent visitors such as the common macaque, Niligiri languor, palm civets, squirrels, and so many different birds, too. This morning we took these pictures in our All-Natural Farm. END_OF_DOCUMENT_TOKEN_TO_BE_REPLACED

A couple of days ago, Michael wrote the post “Monkey Business…”.  The post illustrated my surprise seeing 20-ish monkeys, which to Michael was not an unusual event. Over the last week I too realized that a sudden appearance of the Macaque was just a part of daily life here.  However, I definitely enjoyed my first encounter of a Macaque family outing. I hope you enjoyed as well.

As I was enjoying the post by Michael, something in the second picture caught my attention after a while. In case like me you did not notice it in Michael’s post, it seems like the Macaques are observing something on the lower right.  If you click the picture you will see a larger view.

Did you see the dark ribbon (or it may look to you like a leather belt, if you read Seth’s post on a similar topic)?   END_OF_DOCUMENT_TOKEN_TO_BE_REPLACED

If only to illustrate the contrast between the cool, sleek Nilgiri langur and the pesky, marauding band of bonnet macaque, I offer this beautiful photographic evidence captured by the one and only Sung, whose telephoto abilities far outstrip my own. Sung was (un)fortunate enough to meet this savvy bunch on the roof of the resort restaurant where he had been pleasantly snapping pics of the local bat population (more on them later, I can assure you, esp. now that Sung is on the case). He called to me from across the property, gesturing wildly, and shouting something along the lines of: ‘There are like a thousand monkeys up here!’ Credulous as ever, I thought perhaps there were in fact a thousand monkeys and sprinted from my seat to witness the fracas. (Un)fortunately, I found a mere twenty-ish, a far more manageable pack than the thousand-strong throng promised me. I looked on rather unimpressed. But the high-pitched excitement in Sung’s voice revealed his fundamental anxiety in the face of his first, true encounter with the MACAQUE.

I’ll let these photos tell the story and you, Dear Reader, can be the judge of mine and Sung’s sanity. After all, I do hate to over-dramatize (can’t you tell?). Still, I feel it is my duty as intern, resident, and world-citizen to present the truth as I see it. I should say, however, that about two nights ago I caught the tail-end of a rather tragic Discovery Channel program about the forced re-location of the macaque from one Indian town. I watched these macaque as they were dragged and tricked into tiny cages where they were slammed one on top of another, and it was all deeply disquieting, and just about made me re-think my position towards these struggling sons and daughters of our Planet Earth. I would sincerely regret my paranoia regarding my grey-haired distant cousins engendering an honest fear. Therefore, I hope that, perhaps, their better qualities will also shine through in these photos.

But besides all that garbage, Sung really took some beautiful photos. 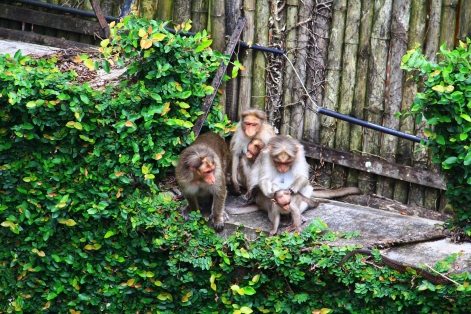 END_OF_DOCUMENT_TOKEN_TO_BE_REPLACED

A couple of days ago, I hopped on a motorcycle (my first in 21 years!) helmed by Saleem, and headed across the border of Kerala into Tamil Nadu. I hadn’t realized until this trip just how proximate the neighboring state was, and that I had actually walked into it several times without realizing I had done so.

Saleem had plans to take me through the measure of forest that extends beyond Kerala to the penstock pipes that carry water from the Periyar River down to Tamil Nadu and a hydroelectric plant.

These pipes are an attraction unto themselves, and looking over the slope down which they run provides a scenic view of the lush farmland of this TN valley. 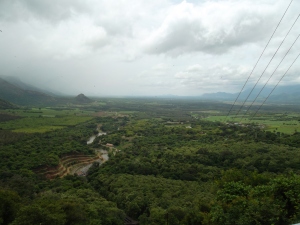 At that time, I didn’t know– and Saleem only hinted at– how fraught with political tension the very spot we were standing is (and has been) to the Tamilians and Keralans. The provenance of this conflict is a century-old treaty between the Princely State of Travancore (which is now Kerala) and the Secretary of State for India, representing what is now Tamil Nadu. Essentially, this treaty gave to Tamil Nadu, an otherwise arid area, the right to use water from the Periyar River for irrigation– for 999 years. This agreement, for all intents and purposes, created the Tamil Nadu you see in the picture above. END_OF_DOCUMENT_TOKEN_TO_BE_REPLACED