When I decided to come to Kerala this summer for my internship, I got most excited not entirely about my work, but really about seeing a tiger. I can’t even remember the last time I went to a zoo, but I know deep in my closet I have a dusty photo of me and a tamed tiger from Thailand. At this time, seeing a wild tiger was actually more of a WILD idea. Since I’m working next to the Periyar Tiger Reserve, a home to approximately 40 tigers and many other animals, I’m practically neighbors with them and awaiting a miraculous moment to see a tiger before my trip to Delhi.

As a Korean descendent, I must introduce you all to some Korean culture and explain why I’m writing a blog post that is dedicated just to tigers. I’m sure a lot of my Korean folks will agree that tigers and Koreans go way back. My relationship with tigers started when I was 3 years old when my grandmother told me a story about a tiger that smoked using bamboo pipes.  My reaction was: “Really? Tigers smoke, too?”

In one of my favorite Korean myths, “Dangun Wanggum (단군왕검),” a tiger and a bear visit the god’s son “Whuan-woong (환웅)” to become a human. In return, Whuan-woong puts a condition to their wish and asks them to eat only mugwort and garlic for 100 days.  All I can do is picture them crying; I can only imagine how spicy that concoction must have been. While the bear succeeds and becomes a human, the impatient tiger runs away and never becomes a human. Just like this myth, Korean myths and folk tales often depicted tigers as strong but impatient and juvenile in character.

In another well-known fable, a tiger is portrayed as a silly creature. One winter, a tiger caught a rabbit. But, the rabbit was very smart and fooled the tiger saying, “If you don’t eat me, I’ll tell you another way to get more fish than you have ever eaten. Here – if you put your tail into the river, you will get many fish!” Unfortunately, the tiger was stupid enough to not know that its tail was getting heavier as the river water was freezing. At the end, the tiger was caught by the village people since its tail was stuck in the frozen river water. 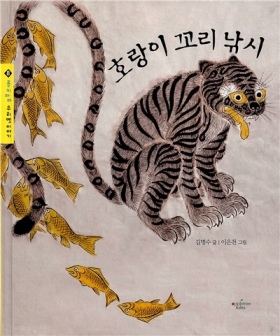 Lastly, Korean fables depict tigers as a villain.  These satirize on the topic of the good triumphing over the evil, just like in the tale of “a brother and sister who became the sun and moon (해와 달이 된 오누이).” In the end, a sister and a brother climbed up a tree to escape from a tiger that was chasing them. The tiger tried to climb up the tree by first putting some sesame oil on its feet; he then tries using an axe.  Both attempts were epic failures.  In the meantime, the sister and brother prayed to God asking for a rope to climb to Heaven. The tiger also prayed for a rope, but God sent him a rotten rope. So the tiger died climbing up a rotten rope that broke in the middle of the sky.

When I shared some of my stories with Vijay, General Manager of Cardamom County, he introduced me to a book called, “A Tiger For Malgudi” written by R. K. Narayan. Interestingly, the whole book was written in the perspective of a tiger that once lived a wild life.  He was then tamed by a magical master and ended his life in a zoo. It was interesting to read of a tiger that learned to think like a human and to communicate with his master.  I thought: if tigers can really think like humans, what would tigers think of humans who took away their homes and pushed their species into far corners of forests?

Indian novel for children: A Tiger for Malgudi

Unfortunately, despite my love for tigers, they don’t exist in South Korea anymore. In the old days, Korea was even called a land of tigers because of the large tiger population; almost 70% of Korea was mountainous land, which is Siberian tigers’ favorite type of region.  However, due to wars and rapid, decade-long industrial developments, many tigers lost their habitat, and now there is no record of tigers residing in South Korea according to the most recent heat sensor camera surveys. These Korean Tigers, widely known as Amur/Siberian Tigers (Scientific Name: Panthera tigris altaica) are now only found in the Russian Far East and a few in the border areas of China and North Korea.

Unlike the Siberian tiger, the Bengal tigers have a bigger population of approximately 1,850 in the world. Among those, about 30 tigers reside in the Periyar Tiger Reserve, Thekkady, Kerala, India. And, in the beginning of this month of June, India announced that it approved four new tiger sanctuaries to protect tigers from the poachers and other tiger smuggling networks. Similarly, WWF Global is focusing on saving tigers by aiming to double the tiger population by year of 2022, the next Year of Tiger. 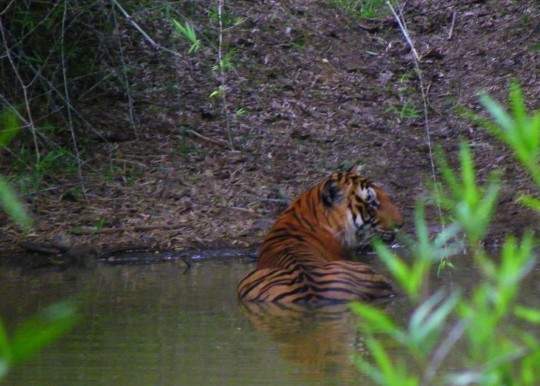 Photo of a Tiger – by Vijay Mampilly, RM of Cardamom County

I hope that these government and international initiatives create a better home for tigers, and maybe, just maybe, I can see at least one tiger before I leave India! 🙂

3 thoughts on “Many Stripes. Many Tales. Few Tigers.”