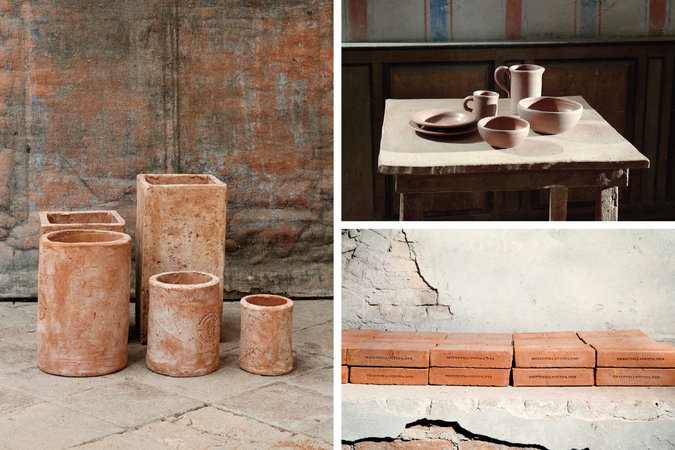 I’ve shared some thoughts on dung in the past, and also experienced first-hand the use of methane collected as an alternative energy source at a coffee farm in Nicaragua. There, the gas was used for cooking fuel, but in the case of Castelbosco farm in Piacenza, Italy, dairy farmers who make Grana Padano cheese also generate electricity from their dung’s methane, and run a museum that showcases poop in part of a medieval castle. They also make the beautiful pots, tableware, and tiles shown in the photo above. Christine Smallwood writes for the New York Times Style Magazine:

THE DAIRY FARMER Gianantonio Locatelli climbed up the steel ladder and peered over the brim of a large corrugated vat, about the size of a very deep above-ground swimming pool. “It’s full!” he exclaimed, with warbling joy. “It’s beautiful!”

The vat was full of liquid cow dung. I handed my phone to Locatelli’s friend, the architect Luca Cipelletti, and climbed the ladder to the top, disembarking on a viewing dock. Beneath my feet the manure bubbled and gurgled, forming foamy peaks and crests. It was a topographical map, a primordial stew. A rich and beautiful shade of brown.

The day was sunny, with a gentle wind. T-shirt weather. From the top of the poop vat we had a view of the entire Castelbosco farm, one of eight farms run by Locatelli in the province of Piacenza, about an hour south of Milan. We could see the barns, home to some 1,500 dairy cows that produce milk for Grana Padano cheese. Their roofs and eaves were painted in cheerful geometric patterns by the British artist David Tremlett: yellows, fuchsias. We could also see the 13th-century medieval castle where Locatelli lives from May to November with his wife, Laura, a cheesemaker. We had breakfasted there a little while ago.

Another vat, this one disused, was directly behind us. At first it appeared to be some kind of “green roof” building. But the verdure that covered it had sprouted spontaneously, nourished by the remnants of fecal waste. It reminded me of the wild grasses of Manhattan’s High Line.

We took in the processing facilities and digesters, also painted by Tremlett, where cow dung is transformed into electricity. Since 2007, Castelbosco farm has been entirely powered by energy produced on the premises, from the cows’ excrement; Locatelli sells the electricity he does not use. Last year, he and Cipelletti, along with the artist Gaspare Luigi Marcone and the art collector Massimo Valsecchi, opened the Shit Museum in 10 rooms on the castle’s first floor. It’s a charmingly unmodern space that showcases paintings, objects, video art about poop, a display about the dung beetle (also the museum’s logo) and a giant coprolite. (Visits are by appointment only, and include a guided tour of the property.)

In addition, the museum produces and sells home goods — including vases, flowerpots, coffee mugs and plates — that are made out of a compound of baked manure and clay that they call merdacotta — “baked shit.” For a site-specific show, composed of the museum’s goods and some of its installations, the group won the top prize for exhibition design at this year’s prestigious Milan Design Week.

But I am still standing on top of a vat of liquid waste, and you are wondering about the smell. Of course you are. The thing is, unless you have the well-trained nose of a sommelier or a professional taster, it’s hard to describe smells. They are not over there, something to be coolly appraised and summed up; they are overwhelming, literally consuming. Describing a smell is like describing a feeling or a mood or an atmosphere. Smells are reminders of the body’s defenselessness and porousness; they come from the inside. But here’s what I can say. The smell, from the platform on top of the poop vat, was pleasant — earthy, farmlike, wholesome. It was far, far preferable to the smell that clung to the barns like a bad memory.