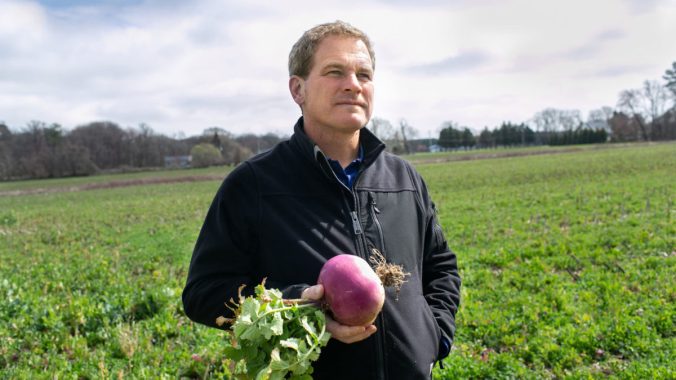 Gabriel Popkin came to my attention twice when I was based in Belize, and had an obsession with Mayan foodways that led to a year of thinking about how to commercialize brosimum alicastrum in the USA. That seemed to have been in vain, except here we are on the trail again. Gabriel Popkin came to my attention a third time in 2017 and then I did not see any of his work again until today. It is good to see it again:

Can ‘Carbon Smart’ Farming Play a Key Role in the Climate Fight?

Markets are emerging to pay farmers to store more carbon in the soil by using improved agricultural practices. But flows of greenhouse gases into and out of soil are complex, and some scientists are questioning whether these efforts will actually help slow global warming.

Trey Hill shows off the carbon-rich soil under his crops. GABRIEL POPKIN/FERN AND E360

Trey Hill led a small group of fellow farmers to a field outside his office in Rock Hall on Maryland’s Eastern Shore. It was a cloudy February day, but the ground was alive with color — purple and red turnip tops mixing exuberantly with green rye, vetch and clover, and beneath it all, rich brown soil. Hill reached down, yanked a long, thick, white daikon radish from the earth and showed his visitors sumptuous coffee-colored clods clinging to hairy rootlets. Those clumps, he explained, hoard carbon — carbon that’s not heating the planet.

Hill didn’t adopt “carbon smart” practices like cover-cropping to fight climate change. He did it to build soil, retain water, and make money. But when the third-generation corn, wheat, and soybean farmer learned about Nori, a Seattle-based startup looking to sell credits for carbon stored in the soils of farms like his, he was all in. Hill didn’t necessarily expect a windfall, but he wanted to show fellow farmers they could make money while helping fight climate change. “If it works out and we make some money on it, that’s great,” Hill says. “If it doesn’t, well, somebody’s got to be first, and we’re willing to take that risk.”

As efforts to wean society off fossil fuels have stalled, “natural climate solutions” such as soil carbon sequestration have rapidly gained steam. In 2018, the National Academies of Sciences, Engineering, and Medicine reported that “negative emissions technologies” — techniques for removing carbon from the atmosphere, rather than simply reducing new emissions of carbon — are needed to stabilize global warming below 2 degrees Celsius (3.6 degrees Fahrenheit), the level scientists believe could be catastrophic.

The Academies’ report identified soil sequestration as a cost-effective and readily available climate solution, with the potential to remove 250 million metric tons or more of carbon dioxide per year in the United States alone. That’s about 5 percent of the U.S.’s annual CO2 emissions, which totaled 5.4 billion tons in 2018. This month, a team led by researchers at The Nature Conservancy (TNC) estimated that if implemented globally, soil conservation and soil-building activities could provide nearly 10 percent of the carbon reduction needed to avoid breaching the 2-degree barrier.