One of the early images in Todo Bajo el Sol shows a group of fishermen hauling their boat on to a beach that will eventually be given over to the towels and umbrellas of foreign holidaymakers. Photograph: Penguin/Random House

Thanks to the Guardian for this review. I had not even heard of this novel yet, let alone had a chance to read it. But since my last 25 years have been dedicated to helping places avoid the pitfalls of mass tourism, I look forward to reading it: 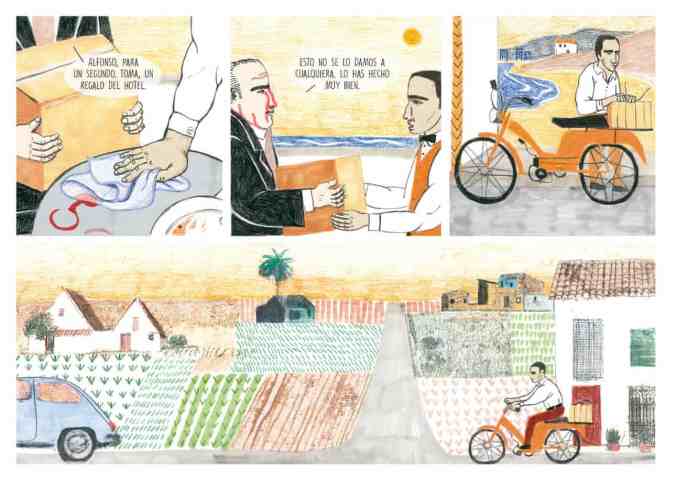 Alfonso, one of the novel’s protagonists, is rewarded for his hard work as a waiter. The box contains a souvenir plate that reappears at the end of the book. Photograph: Penguin/Random House

The opening pages of a new graphic novel charting Spain’s long, profitable and often counter-productive relationship with tourism show four fishermen hauling their boat on to a Mediterranean beach already in the early stages of occupation by the new breed of foreign holidaymakers.

While the fishermen, rendered in monochrome to reflect their looming obsolescence, heave their boat ashore, a tourist, drawn in colour, sits beneath the shade of his beach umbrella and prepares to study a guidebook produced by the Franco regime.

Similar juxtapositions permeate Ana Penyas’s Todo Bajo el Sol (Everything Under the Sun), which is dedicated to “those who had to abandon their hometowns and to those who ended up as strangers in their own land”.

Penyas, who became the first female author to win Spain’s national comic prize three years ago, said the idea for the book came to her in the spring of 2018, when the debate on sobreturismo – or over-tourism – was becoming inescapable.

By then, worries over gentrification, the proliferation of tourist rental properties, the number of huge cruise-liners pulling into Spanish ports and the dire employment conditions of some hotel-workers had raised questions about the sustainability of the the country’s tourism model. They had also led to anti-tourist graffiti and even attacks on hotels, tourist bikes and the odd tour bus.

“All that was going on, and I was also quite connected to movements to protect neighbourhoods from tourism and gentrification,” Penyas says.

“But when I thought about what I wanted to write, I knew I didn’t want to limit myself to a snapshot of that particular moment – not least because things can get out of date very quickly.”

The author, who was born in Valencia, eventually opted to follow the history of mass tourism in Spain from its inception under the Franco dictatorship in the late 1960s, through the heady days of boom and bust and into the current era of Airbnb and boutique hotels…