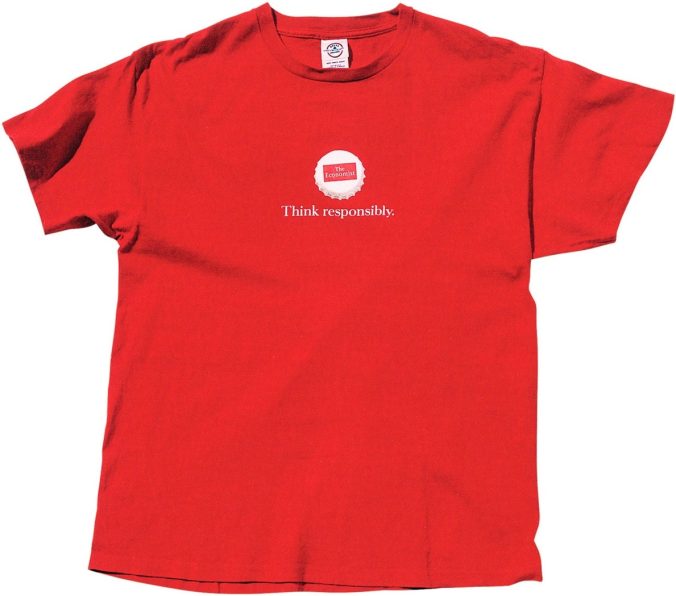 This is from the British magazine The Economist. The message is very stylish, but it’s still a T‑shirt, and it makes me wonder about how to react to such a sudden, challenging dictum.

I would wear the shirt above. No surprise given how often I link to that publication. At our Authentica shops we sell items that serve as reminders. T-shirts are among those items.

We do not sell it, but I can relate to the kind of person who would wear the one in the photo to the right. Like the one above it illustrates a very short and delightful photo essay:

How I amassed more T-shirts than I can store

I’m not particularly interested in collecting things, but there is a kind of running motif in my life: despite my basic indifference, objects seem to collect around me. Stacks and stacks of LPs, so many I’ll never listen to them all; books I’ve already read and will probably never open again; a ragtag assemblage of magazine clippings; dinky little pencils, so worn down they don’t fit into a pencil sharpener anymore. All sorts of things just keep on piling up.

T-shirts are one of those things which naturally pile up. They’re cheap, so whenever an interesting one catches my eye I buy it. People give me various novelty T-shirts from around the world, I get commemorative T-shirts whenever I run a marathon, and when I travel I often pick up a few, instead of bringing along extra clothes. Which is why the number of T-shirts in my life has skyrocketed, to the point where there’s no room in my drawers anymore and I have to store the overflow in stacked-up cardboard boxes.

Whenever I go to the U.S., after I leave the airport and get settled in town I invariably find myself wanting to go out and grab a hamburger. It’s a natural urge, but you could also see it as a kind of ritual I go through. Either one’s O.K…