Image by the author

I recently came across an Oxford professor’s blog that revolves mostly around conservation and birding, and one of his posts was particularly interesting to me. In it, Professor Paul Jepson discusses the increasing presence of photography in the British birding sphere, and what bird photography means for the hobby of birding/birdwatching. I encourage you to read his article (I’ll put a link below), but will first share one idea that Jepson brings up toward the end of the piece, and which was very thought-provoking:

Bird photography is part of the socio-technological assembly that is shaping futures. If birdwatching is to be a cultural force in the twenty-first century, our bird reserves will need to embrace developments and directions in digital technologies. … My thought experiment imagines a system of pay-for nature hides with an observation tower, like the one in Muritz National Park outside Berlin, as its centre piece. Birding has a strong ‘nature as a public good’ mentality. While many bird photographers agree with this principle, they are also willing to pay for entry to the facilities and special places that enable them to get the shot they desire. Nature hides are popping up across Britain and 2017 hide day rates are £75 for the opportunity to photograph Common Kestrels Falco tinnunculus, £99 for Kingfishers and £150 for Black Grouse.

Although I enjoy taking photos of birds and sharing them online, I do not consider myself a bird photographer, partly because I don’t have the specialized gear (my camera is a point-and-shoot model, though its exceptional 65x optical zoom is useful for bird photos). That being said, END_OF_DOCUMENT_TOKEN_TO_BE_REPLACED

The name “Jabiru” is derived from the Tupi–Guarani family of languages from South America and means “swollen neck”; an apt description. This is the tallest flying bird in South and Central America and is second in wingspan (excluding pelagic flyers like albatross) only to the Andean Condor.  This denizen of wetland habitats is a voracious, opportunistic forager on a wide variety of animal matter, living or dead.  Needless to say, an impressive bird and I was ecstatic to see it!

It was past the mid-point of our Belize vacation, and as good and enjoyable as the birding had been, life birds (new species that I had never seen before) were fewer and farther between than I had anticipated/hoped.  I guess that was to be expected given that I have visited the Neotropics several times previously.  I had already seen many of the common, easy, widespread species (e.g., many if not most of the hummingbirds, parrots, motmots, etc.) that make birders new to the Neotropics giddy.  After talking to the local guides, apparently most of my desired life birds were the tough ones (hard to find, rare, skulky, etc.).  As I went through my list of target birds, they just kind of smiled and shook their heads. END_OF_DOCUMENT_TOKEN_TO_BE_REPLACED 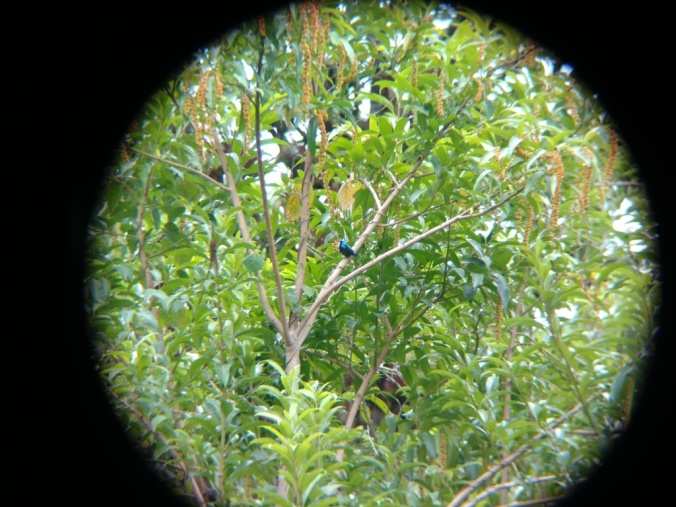 The first time I digiscoped, I wasn’t aware of the term, and I was using a small, borrowed point-and-shoot camera with a guide’s spotting scope. The results ended up here on the blog, though the images are, in retrospect, fairly low quality. In certain cases, however, digiscoping–basically the pairing of a scope with a camera for photography–can yield quite good shots of wildlife, and is arguably more versatile than having a big camera with a telephoto lens attached. Just check out Sharon Stiteler’s photos in her digiscoping article on Audubon’s webpage last year, or simply look up “digiscoping birds” to find some stunning images. Note, however, that digiscoping almost always refers to using a scope, or, in other words, a high-end piece of optic technology that costs anywhere between $400 and $3000–and that’s without the tripod.

END_OF_DOCUMENT_TOKEN_TO_BE_REPLACED

About three years ago, I wrote in a post from Ecuador that “Even after taking a pretty intense ornithology class at Cornell University and working for the Lab of Ornithology, I don’t really consider myself a birder.” Last year I revised that statement a bit, clarifying that “now, as James and I add our observations around Xandari to eBird every day, my opinion may have changed slightly (though I can’t yet subscribe to the labels of bird-head or bird-nerd by a long shot).” Then, this January I wrote of myself and my friends John and Justin that, “Although none of us are the type of birder that pursue ‘life lists’ — a checklist of the thousands of bird species in the world that one has seen — we all use eBird and are definitely interested in seeing and identifying wildlife of any sort.”

END_OF_DOCUMENT_TOKEN_TO_BE_REPLACED

This week, after about six months away from Costa Rica, I’m working at Xandari again, and it’s good to be back! On Saturday morning I walked around the trails for a couple hours and logged thirty-one bird species seen or heard, which counts as a pretty good list for Xandari, in my experience. Among the usual suspects were a few birds that are relatively uncommon sights, though not rare by any means: Chestnut-collared Swifts, Sulphur-bellied Flycatchers, and a male Long-tailed Manakin, which is always a pleasure to see or even hear. I also got an uncharacteristically good look at a Rufous-and-white Wren, a species that long eluded our efforts to spot when James and I first got here a year ago, despite its eerily human-sounding whistle that frequently pierces the forest trails. And although it’s a very common bird around here, I did get an okay photo of the male Red-crowned Ant-Tanager, which can be tough given their predilection for skulking around among dense vines.

One of the plots of coffee planted last June, now shaded by banana and tiquisque.

END_OF_DOCUMENT_TOKEN_TO_BE_REPLACED

I recently wrote an article for the Saporta Report, a metropolitan Atlanta newspaper, on the joys and possibilities of birding in Georgia. It might have some useful information if you’re ever in the area and want to identify the birds that are flying by overhead, so check it out:

…While the awesome wilderness of, say, the mountains of north Georgia guarantee an incredible experience for birders and other naturalists, local parks and preserves like Lullwater have much to offer as well. Just recently, for example, I stopped in at the Clyde Shepherd Nature Preserve (also in Decatur) and the Dunwoody Nature Center (in Dunwoody) and managed to get a few glimpses of some of the metro area’s more interesting avian visitors, including the pileated woodpecker, red-shouldered hawk, yellow-bellied sapsucker, and winter wren. A vigorous hike in Sweetwater Creek State Park (in Douglas County), also not far from downtown Atlanta, turned up a young Cooper’s hawk in addition to more common birds of the forest, such as titmice, nuthatches, woodpeckers, and so forth — a good day, considering that I was also treated to incredible vistas and the historic mill ruins on the Sweetwater’s banks. END_OF_DOCUMENT_TOKEN_TO_BE_REPLACED

White Ibis on the banks of a river.

As I hinted in Part 1, Carara National Park is great for experiencing much of Costa Rica’s famous biodiversity. Monkeys, iguanas, poison dart frogs, and insects, together in a rich rainforest replete with all sorts of weird fungi that can look tasty and cute. Upon entering the park, James and I were greeted with the laughing calls of Black-hooded Antshrikes, birds that enjoy the columns of marching insects that commonly go by the name of “army ants.” Plenty of other birds with the word “ant” in their names made themselves known with their songs or movements in the undergrowth: male and female Dot-winged Antwrens, a Dusky Antbird, several Chestnut-backed Antbirds and Black-faced Antthrushes, and even a Streak-chested Antpitta heard from afar.

Apart from birds, we also saw several species of butterfly, including this one with the classic owl-eye pattern on its wings to startle potential predators. We also saw cicadas, but several times they had fallen prey to skillful salliers from silent perches. This female White-whiskered Puffbird, as well as this woodcreeper (Long-tailed, perhaps?), both emerged from their hidden leafy blinds to land somewhere with a juicy, shiny cicada in their beaks. There were several other woodcreepers doing their job–creeping along tree trunks–like a Streaked Woodcreeper with its powerful bill, and in general James and I struggled to END_OF_DOCUMENT_TOKEN_TO_BE_REPLACED

I was working from the internet café during a windy day last week-end when I thought I was squinting again. “Did you see that bird? It has two tails!” my colleague Martin exclaimed entering the room a little later. I checked out the sighting: a racket-tailed drongo. The most surprising, graceful creature I have ever seen. Actually, I didn’t know much about birding before I got here. Since then, I’ve learned about the fallouts following a storm, the threats to bird migration and the ethics of the birder. As of yesterday, thanks to India’s cable tv, I’ve learnt from a Hollywood movie that birding can also be a competition. END_OF_DOCUMENT_TOKEN_TO_BE_REPLACED

As I had a spare couple days on mainland Ecuador before flying to the Galápagos, I took a very brief trip to Mindo for a day and a half, where Mari Gray, a pre-kindergarten teacher at the Tomás de Berlanga school in Santa Cruz, told me I should be able to see lots of cool birds. Perhaps not too coincidentally, my host in Quito had asked me if I’d heard of Mindo just a few hours after Mari emailed me about the town, similarly informing me that the biodiversity was incredible, particularly for birding. 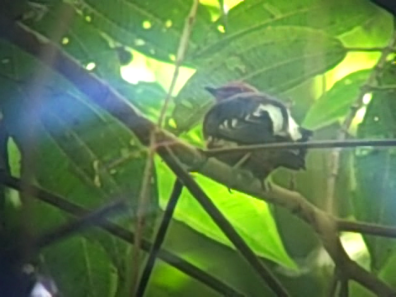 male Club-winged Manakin photographed by the author through binoculars

Even after taking a pretty intense ornithology class at Cornell University and working for the Lab of Ornithology, I don’t really consider myself a birder. When I went on a number of field trips for the class it was the first time I’d really used binoculars with the intent of just spotting birds, and I don’t even know the difference in calls of an American Robin from an Eastern Bluebird, though I can tell you their species, genus, family, and order, as well as those of 149 other common North American birds. Still, when I read that over three hundred bird species reside in the Mindo area, I knew it was an opportunity that nobody should pass up, and this was confirmed by one of my ornithology classmates who knew beforehand over half the bird families we learned. Then I read that the Club-winged Manakin, a bird I’d learned about in class, was fairly easily seen performing its lek courtship display, I knew it was an opportunity I could not pass up.

A lek, although the basic monetary unit of Albania, in this case is the Swedish-based term for a small area where males of a species communally display for females in the hopes of attracting one or more as a mate (the Manakin family, Pipridae, is polygynous, i.e. males have several female mates). END_OF_DOCUMENT_TOKEN_TO_BE_REPLACED