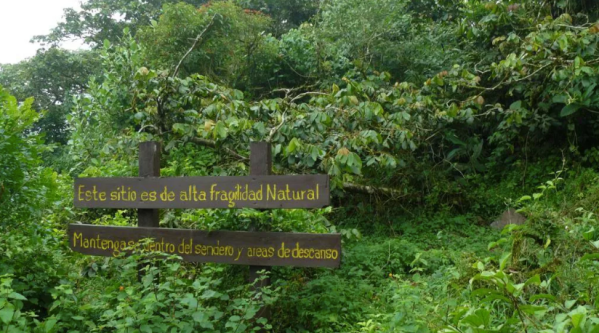 Early this morning Pierre and I set out from Morgan’s Rock towards Granada, which is maybe two and a half hours away. Before reaching the city, we turned onto a road that led to Mombacho Volcano, an inactive peak with several extinct (and some fully collapsed) craters. The volcano is protected by the Mombacho Volcano Nature Reserve, created in 1996 by the several local fincas on the volcano’s foothills that comprise the NGO Cocibolca Foundation. Our time at Mombacho, described in the rest of this post, is part of the exploratory trip that Pierre and I are taking over the next three days, assessing the possibility of connecting Morgan’s Rock’s tour offerings with other operators in the area.

The day’s activities started at the Mombacho Volcano Nature Reserve (MVNR), where we met our guide Jennifer. We decided to take the longest trek, called the Puma Trail, so named because there are some big rocks and even caves that pumas are said to live in, although none have been sighted in a decade. Prior to starting this four-hour hike we stopped by an area called Los Fumalores where Jennifer had fun by daring us to put our hands in a small hole next to the trail, reassuring us that no snakes would be inside. As we placed our hands near the opening in the ground, we could immediately feel a stunning temperature difference. The place is called Los Fumaroles because sulfuric gases rise from volcanic holes and crevasses in hot gushes, heating the surrounding stone to a surprising degree. This area also provides a nice view of Las Isletas, which are known as children of Mombacho because they are islands initially created from a volcanic eruption. I mentioned Las Isletas very briefly here.

The Puma Trail’s path is very well maintained, as are all the trekking areas in MVNR. Stone, wood, and volcanic gravel are most of the materials used to create the paths and many steps that make the Puma Trail rank as the most difficult of those offered at MVNR. As we went along, Jennifer told us about the three ecosystems present on the volcano: cloud forest, dwarf forest, and what I suppose would translate as “relatively sparse vegetation.” Dwarf forest is so called because the trees don’t grow above 5 meters high due to strong winds and shallow roots. I forgot to mention that it was really windy on Mombacho, which is definitely a good thing. I’ve been on too many hikes where breezes were seldom and sweat was a constant. Not so at MVNR. The refreshing zephyrs often flew through the trees; the only downside I can think of is that perhaps they were also responsible for the heavy cloud cover that made all the look-out points simply resting areas where one could breathe cloud (not the worst trade-off but certainly the least photogenic). 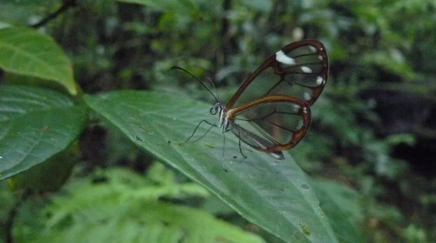 Cloud forests are great environments for mushrooms and endemic species. Some salamanders, for example, can only be found at MVNR; other plants and animals are also only native to the volcano or Nicaragua. The amphibians, which include the famous tropical red-eyed tree frogs, are most easily viewed at night, when light can be reflected in their eyes as they hide in their bromeliad houses. Some flowers have amusing names like “Mother-in-law Tongue,” whose broken leaves drip irritating, poisonous sap, and whose stems, if eaten, are said to cause infertility, illness, or death. Another native plant in the bromeliad family is called “Fire Sword.”

After four hours of clouds, trees, photographing mushrooms, and breezes, we reached the end of the Puma Trail and quickly checked out a tunnel path near the guide-house. Thanking Jennifer, we descended the volcano to Café Las Flores’ Hacienda El Progreso (The Progress), one of Mombacho’s protected fincas and the only one on the volcano certified by Rainforest Alliance.

Café Las Flores (CLF) offers tours of their coffee plantations, bird-watching excursions, and a canopy tour over the coffee. After a delicious typical Nicaraguan lunch at the Casa Hacienda, we followed Ramón through the coffee-husked plantation paths and learned about CLF’s growing, cleaning, drying, and selection process. They collect rainwater (no minerals) and water from a volcanic stream (full of sulfuric acid and iron) to rinse the coffee. This sugary water then accompanies cow patties into the bio-digester that converts the material into methane gas and excellent fertilizer. I’ll include images of the digester in a video soon to come. The idea is similar to the sort that Michael described here. The methane gas is used for the kitchen at the Casa Hacienda—that is, the excellent lunch Pierre and I had eaten not half an hour before was prepared completely by a sustainable and renewable resource. As if trying to test the amount of recycling processes a liquid can go through, water that is left over from the methane production runs into a pool full of hyacinth plants that re-oxygenate the water so that it can be used to water the garden or coffee as necessary. 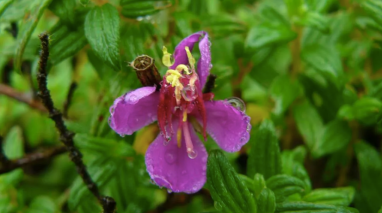 The coffee origins tour ends right where the canopy tour starts, and our canopy guide Mario was waiting for us with harnesses and helmets. Ramón fluidly switched roles and acted as our second guide for the zip lines, operating the safety carabineers and hooking us up to the lines while Mario received us at the next platform. I had been on the Mombo Canopy Tour some eleven years before, when the infrastructure had been on the other side of the volcano. In recent years the zip lines have been moved to the side of the volcano closer to Café Las Flores, where tourists access is much stronger: the roads are in better condition (4×4 isn’t strictly necessary) and people already visiting the Nature Reserve can stop by the canopy tour.

This newer version of the Mombo Tour is a bit tamer than the original, but has the added interest of its location: we zoomed over the very same coffee plantations that produced the invigorating brew we drank over lunch. The canopy tour also has fun additions to the typical zip lines between trees. One is a sort of tightrope-walk with a supporting cable above, the second is a swing, and the third (and my favorite) is called the “boomerang,” where you must pull yourself up to a higher tree by a rope so that you can then zip back down to your starting platform. When we got to the boomerang, there was a family of howler monkeys waiting for us, which increased the incentive to pull ourselves up to their tree.

I have some videos of the coffee and canopy tours, which I will try to get uploaded when I can. Tomorrow Pierre and I will bike from Granada to Lake Cocibolca, switch vehicles (kayaks!) and head to an island on the lake. More on that tomorrow!