Today we had a visit from a very important contributor, Mr. Vijaykumar Thondaman, the generous gentleman whose remarkable photography skills and passion for wildlife have furnished us with the ever-popular “Bird of the Day” series. 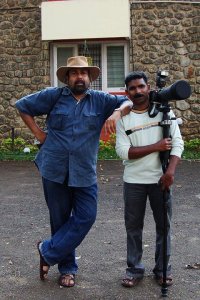 We forgot to snap a photo so we stole this one of Mr. Thondaman (left) with assistant Jayan

Sipping tea and chatting with Vijaykumar was not only an honor (in addition to being an accomplished wildlife photographer and naturalist, he is the nephew of the Late His Highness Raja Rajagopala Thondaman, the ninth and last ruler of the erstwhile Pudukottai State), but it was also an educational exploration of the feathered fauna of southern India. With a palpable passion for the subject, his ornithological knowledge is the consequence of a unique upbringing, as his father, Maharajkumar Radhakrishna Thondaman, maintained a mini zoo with blackbuck, sambar, chital, barking deer, four-horned antelope, foxes, crocodiles, pythons and wild and imported birds. More specific than his father’s captive collection was his small ornithological museum where Vijaykumar learned taxidermy at a young age. Vijaykumar grew up in the 100-acre campus of the New-Palace (the present Collectorate), which had a collection of rare trees and shrubs and wildly roaming peacocks, rabbits, partridges, quails, blackbucks and chitals, none of which exist there anymore. His love affair with wild-life, however, has been an indelible part of his life ever since.

Vijaykumar’s photographic expertise also appears to be something he acceded to. His uncle, the Maharaja, taught him about nature photography and by the age of ten he was roaming the grounds of the New-Palace with his 35 mm Braun Camera snapping photos of wildlife and insects. Interest as fervent as his, though, is not something one inherits, but something one develops. Visits from Dr. Salim Ali, father of Indian ornithology and M. Krishnan, father of Indian wildlife photography, boosted Vijaykumar’s interest in photography and conservation. Vijaykumar’s pieces have since been seen in several exhibitions and published in countless books, magazines, dailies, documentaries and other works. He has been instrumental in conservation efforts and in encouraging government involvement in preservation and conservation.

During his visit to Cardamom County, he showed us his camera, an impressive piece of machinery that had Sung (our resident photographer) in awe. He imparted some wisdom on Sung, giving tips of the trade about timing and lighting, and emphasized the importance of getting light in the birds’ eyes, without which, he says, “the photo is dead.” He says he focuses on birds as the subjects of his camera’s affection because of the challenge they give him. Jungle birds, more than water birds and other animals, are elusive and rare – after all who doesn’t love a good chase? Having grown up with such an exposure to natural and photographic resources, Mr. Thondaman insists that his best education was in fact “trial and error.”

Vijaykumar and his assistant Jayan were kind enough to assist Sung and me in identifying the species we captured some footage of. Sung’s is of an Crested Serpent Eagle, and mine is of a Racket-Tailed Drongo (and a macaque family). I’ll let you guess which is which and please keep in mind, Sung is good with a camera, and I, as you’ll see, am not. Hopefully the remarkably long, two-pronged tail of this particular bird species will make up for the dizzying camera work perpetrated in capturing it.

6 thoughts on “Visit with Vijaykumar Thondaman, “Bird of the Day” Photographer”