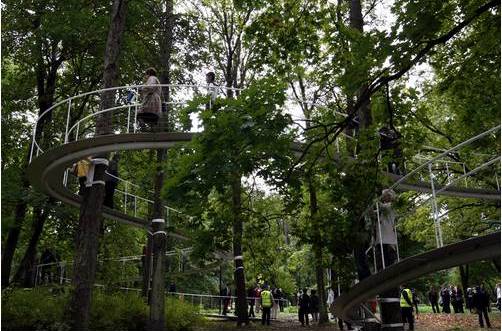 When the Estonian city of Tallinn was named the 2011 European Capital of Culture organizers immediately started planning a festival to highlight the fact that the city has much more to offer than the picture postcard views.  The LIFT11 Urban Installations Festival is intended to showcase the city’s innovative use of public space from 12 June to 22 October 2011.

The temporary urban installations range from objects of art and architecture, to land art installations set up in and around the city space.  The pieces are meant to be interactive, asking visitors to use their senses in how they perceive them, including their sense of humor. Works 1-10 were selected by open competition, but the 11th installation, ‘A Path In The Forest’ by Tetsuo Kondo Architects, was made by invitation and arranged in partnership with the EU–Japan Fest Japan Committee, which engages in promoting Japanese culture in Europe.

Situated in an area of old growth forest appropriately near to the newly created Japanese Garden by landscaper Masao Sone, the 95 meter long zen-like elevated pathways wind from ground level up into the canopy of the trees.

Like other works of LIFT11, ‘A Path In The Forest’ brings the audience to where one does not usually happen to be: to a walk above the ground in the midst of the trees, looking at the park and the surroundings from another angle. The installation invites people to perceive how the nature is changing, how the trees are changing colour and eventually dropping their leaves altogether. Walking this white path will be like reading a modern Japanese novel. We are asked to join in a curious and extraordinary journey, where the atmosphere is recognisably familiar and at the same time fascinatingly strange, making the border between a dream and wakefulness disappear.

One thought on “Blazing Trails”