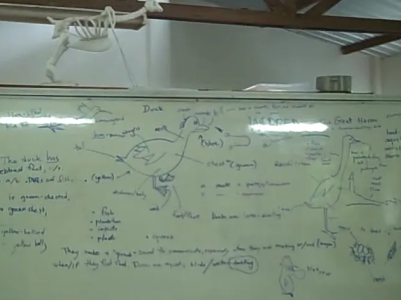 Snapshot of whiteboard on Friday afternoon

Although I have not yet posted as promised about the birds I saw in Mindo, I have to describe my week so far on Santa Cruz before I forget the details and delay the sequence of more current and relevant events too much.

I arrived at school early Monday morning to start working at the Tomás de Berlanga school (named for the man who first discovered the archipelago). I was to temporarily take the place of an English teacher who was still waiting for her visa renewal on the mainland, or “el Continente,” as Galapageños call it, and teach English to two classes.

For the upper levels of the school, classes are on a block schedule of eighty minutes periods, and my two classes were of intermediate English level 7th-9th graders and 10th-12th graders. Each group was of ten to twelve students that had all been born on one of the islands or el Continente, and some of whose parents speak English.

My goal for this first day was to spend the classes gauging the students’ English proficiency, their interest in birds, and especially their knowledge of Santa Cruz’s avifauna. One of the ways I did the former was via an exercise that one of the other English teachers, Eduardo, recommended: put a sentence on a piece of paper and cut it so each word is separated, mix them up, and give them to groups of students to put back together. I thought this was a great idea, so I took some time to think of sentences that might have several ways to be composed (both to ease the process for students but also to see if there were any trends towards certain structures).

The sentence-building exercise certainly helped determine what some common mistakes can be, so after tackling those issues I moved on to talking about some of the local birds, asking the students what they commonly saw and if they knew the English names for any of them. The older group seemed less knowledgeable about birds and sentence structure, but after four more days with them since then I attribute this more to initial differences between ages in motivation and willingness to share.

On Tuesday one of the basic-level English teachers was sick, so Eduardo, Adam (the advanced-level English teacher) and I consolidated all the English classes, which meet at the same time, together to go on a bird walk outside the school. Tomás de Berlanga is 4km away from Puerto Ayora on Santa Cruz’s main road (called Baltra) and basically all of it is uphill—the Puerto is, of course, at sea level, while the school is in the humid highlands where Scalesia (the subject of another post, but for now I should say it is a native tree) grows. Once you make the turn onto the dirt (crushed red volcanic rock, actually) road, it’s about a four-minute drive (seven- or eight-minute bike) to the school, which is comprised of many classrooms separated by lava-gravel paths and a variety of trees. Before heading out, I introduced the students (of which there were about fifty, divided into three groups under Eduardo, Adam, and me) to pishing.

I first learned of pishing during an ornithology class weekend field trip to the Cornell University compost heaps. A birder friend who wasn’t in the class but works for the Lab of Ornithology had joined the group, and we walked through the late winter woods looking for chickadees and anything else that might be in Ithaca at the time. Pishing is done by making a “shhh” sound as if you were shushing someone and then controlling it by opening and closing your lips, pushing the sound out in bursts similar to a birds’ call (more detailed information on the practice is also for another post, and perhaps someone else’s). When my friend pished, some chickadees would flutter close enough to touch if we had amazing hand reflexes, and I was very impressed, especially since it was cold enough that I couldn’t stop my lips from sputtering when I tried to mimic him.

The first day on Santa Cruz, once my bags were in Reyna Oleas and Roberto Plaza’s house (I’m staying with them while I’m in Galápagos), I walked around their heavily vegetated humid highland property and pished until I was surrounded by at least sixteen Tree and Ground Finches and Yellow Warblers. I had known that Galápagos birds were still relatively unused to humans, but I hadn’t considered how easy it would be to draw them in! I mentioned in my last post that I don’t consider myself a birder, but perhaps pishing for fun contradicts that claim. Anyway, back to the school group:

I explained to the students that everyone pishing at once might confuse or scare the birds away, that nobody should try to chase the birds, and gave my two previously pictured guide books to Adam and Eduardo. We went walking on the group of dirt roads around the school and saw plenty of Ground (definitely Small, maybe some Medium) and Tree Finches (Small), dozens of Yellow Warblers, a handful of Mockingbirds, some Smooth-billed Anis, and a Masked Booby (one of the students’ father, who works for the Park, happened to be driving by with one in his truck). The students enjoyed pishing, especially when the results were so easily witnessed. Yellow Warbler females in particular seemed to be abundant and curious at the first pish. On just the second day of the week, everything pointed to a good track forwards and I was very excited to continue! I’ll have more to say about the next three days of the week later.