Screen shot from my subscriber’s access to old New Yorker articles–the text is cut off at the bottom of the image but you can still savor the journalistic description in the sampling.

Lillian Ross, today among the last living chroniclers, along with A. E. Hotchner, of Hemingway in living technicolor, wrote this profile of him when he was a 50-year old superstar and she was a 24-year old who had been a New Yorker staff writer since she was 19.  How’s that?

Who cares how?  I care that.  And thank her for it on this, his 113th birthday.  She has always had a distinctively invisible presence in her writing, which makes Hemingway pop on her page.  Of course he never popped. He banged. Exploded.  Her profile makes a trip to your local public library worthwhile to find a 62-year old hard copy of the magazine.

Or, if the library near you is no longer, subscribe to the magazine and gain access to all content in past issues.  I care that she, and Hotchner, and others, have shared small sketches not designed to titillate as gossip, but yes to amuse.  As in amuse-bouche.  Small tastes for those who aspire to greatness and are not embarrassed from time to time to wonder how the great think, how they feel, what they do:

Mr. Hemingway spoke of his new book: “Across the River and Into the Trees”, of authors he thinks he has beaten; Turgenev, de Maupassant, and Stendhal. But nobody is going to get him into the ring with Tolstoy, unless he keeps getting better. His favorite painters are Breughel, El Greco and Cezanne. He considers Degas a wonder painter, but Cezanne taught him to make a landscape. He’d like to see all the new fighters, horses, ballets, bike races, dames, bullfighters painters, sons of bitches, big international whores, restaurants, newsreels and never have to write a line about them. 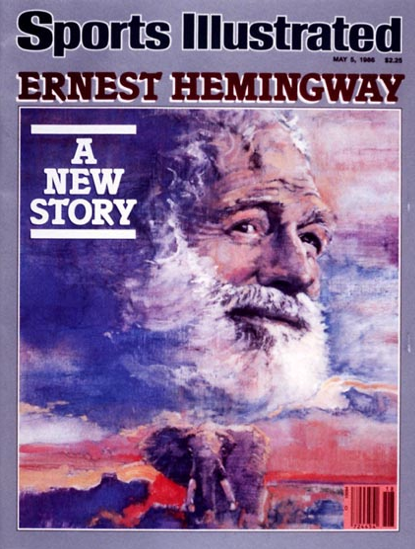 Now, a funny coincidence.  What might Mr. Hemingway have said had he known that today, while his birthday was celebrated, the King of Spain–who by all accounts appreciates many of the same things that Hemingway enjoyed–was removed as the honorary president of WWF Spain.  Hemingway himself was no stranger to hunting elephants, but we might give him a break for living at a time before there was a strong consciousness globally of the endangerment of species.  So what would he have done today? 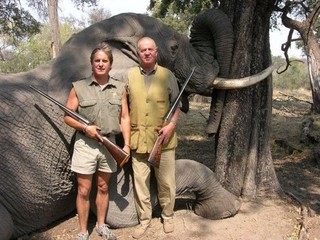 Surely he would have laughed.  What else could he have done?

The irony would have made him bellow.

How could it be that a man who loves to hunt should serve as the honorary president of an organization that decidedly does not endorse hunting?  The acid irony of the African elephant, which WWF lists as a priority species for conservation, posed slumped and dead next to WWF Spain’s triumphal-looking honorary president.  No wonder there was a petition calling for this removal, or the fellow’s more decent opportunity to resign.