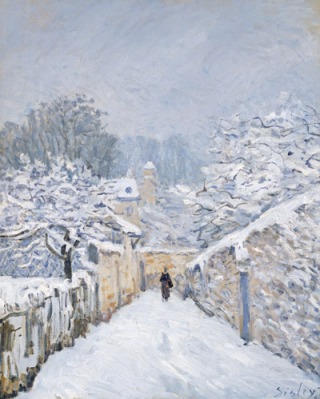 ‘Snow at Louveciennes’ by Alfred Sisley, 1878

It had not occurred to me that an essay, let alone a collection of essays, on this particular topic was needed.  But then, perhaps it helps make the point about the importance of essays, and here we have one of the finest living essayists in the English language at work making the case:

Winter Adam Gopnik
Quercus, pp.288, £18.99, ISBN: 9781780874449
Adam Gopnik’s dazzlingly knowledgeable and beautifully told essays on winter began life as the Massey Lecture Series on Canadian National Radio, the Canadian Reith lectures. But dismiss from your mind any of the rather stodged up seriousness that always seems to hang around Important Radio Talks on the BBC. Gopnik is serious, and believes and cares passionately about things, but he understands exactly what an essay is, or should be: an attempt to get at something, a stroll into the not-yet-known or only-just-thought-about.

He says in a foreword that his chapters are in fact edited transcripts of trial runs for those talks, given to a few friends, at home, in front of the fire, with the winter outside. He must have prepped hard, but these are spoken not written words, a man putting on a show, explaining to people he loves and likes what he feels and thinks and believes.

The result is wonderfully open-ended, loose but decorated with ways of seeing things you might not have imagined, not proscriptive but suggestive, clever but always with an eye on the audience. He often reminds you of what you half know you have already been told, but that is because ‘Spoken sentences have a natural three-part rhythm: a statement, its expansion, and then its summary in simple form.’ It is a supremely generous way of writing and you end up loving Gopnik, as the people around his fireplace must have, for his slight melancholy, his generous way with arcane information and jokes, his erudition, his epigrammatic gifts, his insistence on what matters to him, the amazing range of his mind.

Winter is a five-sided prism through which he views the emergence of the modern world. Over the last 300 years, our relationship to winter has turned from one in which winter called the shots to one in which we do. The season once exerted a brutal grip on the populations of the northern hemisphere. The only correct attitude, Gopnik says, was to hold it at bay, to survive it.

But in the last three centuries, with increasing riches, comfort and technology, that has changed. Gopnik’s winter is a world in transition from its potency to our potency, from it being in charge to us being in charge, with many finely graded phases between those two poles. It is not quite true that no one loved the winter and its beauties in the distant past. There are ravishing descriptions in the Iliad of snow falling ‘on the grey sea and the beaches, and the surf that breaks against them’, and a love of heroic winter glamour in Anglo-Saxon poetry and of its cosmic mystery in Gawain. But for Gopnik, the Romantics essentially invented winter, largely because they were living inside and looking at it from the comfort of their drawing rooms. ‘It is one of the oddities of our cultural history,’ he says, ‘that we tend to overlook the authors of our comforts, even though we are almost always perfectly knowledgeable about the poets of our distress. Every one has heard of Caspar David Friedrich but who knows the names of the men who invented central heating?’…

One thought on “An Essay On The Essay, Disguised As A Book Review”