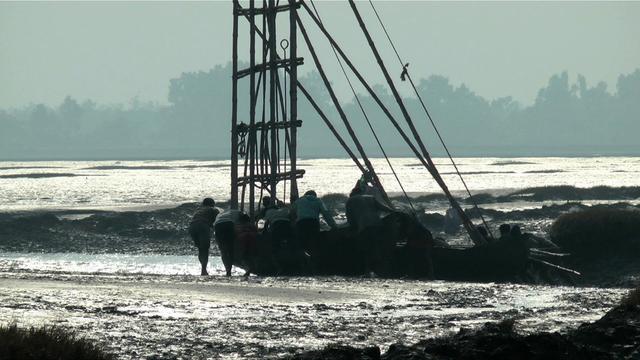 When introducing his documentary at the Paris International Documentary festival, Cinéma du Réel, director Kamar Ahmad Simon said to the audience: “Thank you for being here. I will be back at the end of the screening to discuss the film with you. I’d like to know your opinion and to answer any questions you may have, whether you liked the film or not, so I can go forward and progress.” If I had to sum up the response from the audience and jury it would be something like: “Please keep going. We’ll follow.”

Click here for the  trailer  of Shunte Ki Pao ! (Are you listening)

Rakhi and Soumen are a beautiful couple, they are young, in love and are the happy parents of little Rahul. You could say they have it all. That’s if their region of the coastal belts of Bangladesh had not been wiped out by the tidal in 2009. Rakhi and Soumen are climate refugees. A couple among  almost a million homeless, stranded under the open sky on an ancient dyke. They now live in a small village named Sutarkhali. Rakhi and Soumen were from the middle-class, today three years after the tidal, they buy fruits by the unit, fish for their meal and line-up on neverending queues for food aid. And life goes on.  Shunte Ki Pao ! (Are you listening) is not about disaster, it tells how people build a life afterwards.

Rakhi is the teacher of the village school, she communicates to her class which includes her son Rahul, her love for the land and its fruits. Soumen, builds their house, participates to the village development. Also he tirelessly lobbies the authorities so that they finally begin construction of the dam destined to offer them shelter. When the works finally begin the whole population chips in with their bare hands.

I’m sorry to refer to an American romantic comedy while I review the first Bangladeshi documentary I’ve ever seen, but the story reminded me of the opening scene to “Eat, pray, love”.  The heroin remembers of a psychologist friend who had been hired to work with women in a refugee camp, she was afraid to lack of experience to assist people who had lived through disaster, uprooting and catastrophic loss. But once she started working with refugees she discovered that the topics discussed often revolved around… love. Rakhi and Soumen often argue, she says she likes order, he says she nags him. She confides in her girlfriends, they poke fun at her. Rahul is in love with his sunglasses, his parents would like to offer him a present for the holidays but can’t afford it. It’s an intimate and hopeful tale. Hopeful, even when nature strikes again.

One thought on “Documentary: Shunte ki pao! (Are you listening), the life of a family of climate refugees in Bangladesh”