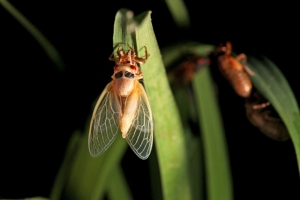 Our attention to entomological wonders dropped off, sadly, when Milo (whose interests and talents happily extend beyond bugs) left India last year.  To keep bug love alive, we posted recently about a current entomophenomenon linking to a blog post on the New Yorker’s website; now note that another of their writers has treated it, crafting words so we might have thought of it this way ourselves (if only):

It is the nature of youth to make a racket. This happens reliably in New York City every weekday between two and three in the afternoon, when school lets out. Teen-agers spill onto the sidewalks and descend below ground into the subway, where, having loosened their uniforms and shed decorum, they occupy the airwaves—shouting, flirting, arguing, cajoling, checking in, checking out. They sing the song of themselves, loudly, jubilantly, to a rhythm that only they can hear.

In the coming days, the woods and lawns in and around the city will experience a similar visitation, from periodical cicadas. For seventeen years, juveniles of three species of the genus Magicicada have been underground, sipping on rootlets and quietly growing. When the soil reaches the right temperature—64 degrees F, measured eight inches down—they will emerge in astonishing numbers, molt, climb into the trees, and, for the remaining three weeks or so of their lives, sing an exoskeleton-rattling chorus. Periodical cicadas are distinct from the species that emerge annually, in far lesser numbers, and sing in the dog days of summer. (There are seven Magicicada species in all, four of which emerge, every thirteen years, in the Southern and Midwestern states; they seem to like prime numbers.) The reason for the long life cycle is the subject of debate, but the point of the din is clear: to court and mate and so start the period anew.

The racket comes from the males. Each sings by rapidly clicking a portion of his abdomen in and out, as one might click and unclick an empty soda can. He alters its shape and position to make the frequency rise and fall, and because his abdomen is mostly hollow, it acts as a resonance chamber that amplifies the sound and broadcasts it for some distance. (Cicadas can relax and desensitize their auditory organs, so they don’t deafen themselves.) The quality of the song varies among species; some cicadas in Southeast Asia produce “spectacularly musical songs, with more pure tones, complex frequencies, and harmonics,” David Marshall, a cicada researcher at the University of Connecticut, in Storrs, told me. “There are some that sound like birds, whereas ours are more grating, although some make a pleasant syrupy drone. When Magicicada is out, it sounds like a U.F.O. is landing.”

New York’s seventeen-year brood, known to scientists as Brood II, extends from Connecticut to Georgia and has been emerging south of here for a couple of weeks already. Marshall was on his cell phone, in the passenger seat of a car in Elkin, North Carolina, near the southern limit of the emergence; John Cooley, a colleague, was driving. “We’re driving around with our windows open, listening,” Marshall said. The three seventeen-year species aren’t equally abundant everywhere, and the researchers are interested in, among other things, charting their respective distributions, to test ideas about cicada ecology and evolution. Over the past ten years, Marshall and his wife, Kathy Hill, have recorded most of the cicadas of eastern North America, as well as many southwestern species, and made the songs available on their Web site, insectsingers.com…

Read the remainder of the story here.

2 thoughts on “Cicadas In Love”