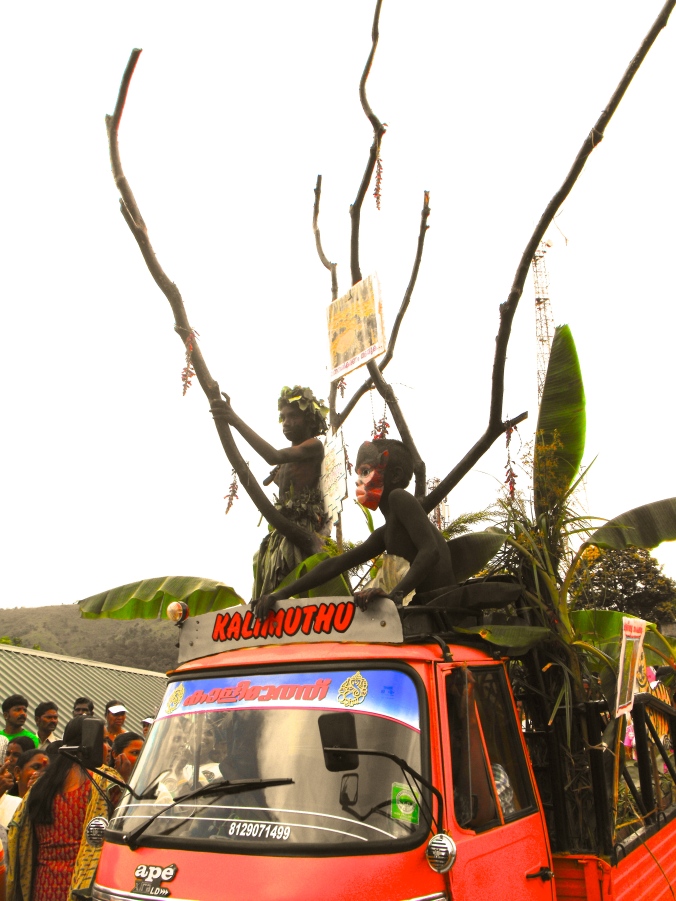 Parade float with children dressed as plants and animals

On the 8th of October Kumily held a parade in support of the Periyar Tiger Reserve and Wildlife Week.  As an intern for Raxa Collective, I had the unique opportunity to participate in this procession. This was my first Indian parade, and in some ways it was very similar to the parades I had participated in the USA; the majority of people waited around in some confusion until someone with the knowledge of the lineup said to start walking, but what made this a very unique experience is I couldn’t understand the conversations of anyone besides my own party.

The language barrier made it a bit more confusing, but it also allowed me the time to observe all the other people and floats preparing for the parade. Hundreds of kids were dressed in their school uniforms, playing with their signs and flags promoting conservation; people were putting last-minute touches on the back of pick-up trucks that were transformed into forests with children painted as animals in the back; traditionally decorated drummers were practicing in  a circle for their performance. These sights and sounds were very intriguing and filled most of my hour of waiting.

Something that took me by surprise during this whole experience was the number of people in the parade. It must have been more than half of the small town of Kumily participating. It was inspiring to see so many people, enough to fill a 2-hour parade, from so many different areas of the community coming together to support the conservation of nature during wildlife week.