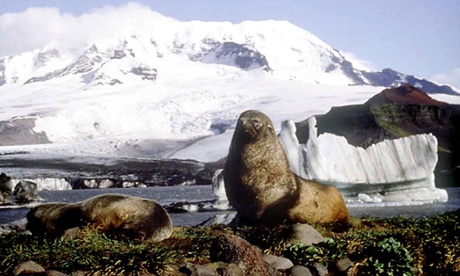 Thanks to the Guardian for their coverage of environmental issues around the world. We give credit where due, and this is continued good news for marine conservation without any qualifications (not even going to mention mining policies):

The Heard Island and McDonald Islands Marine Reserve has been expanded by 6,200 sq km following a scientific assessment of its conservation values.

The reserve now spans 71,200 sq km of ocean. Heard and McDonald Islands, an Australian external territory located 4,100km south-west of Perth, are barren, uninhabited outposts considered among the most remote places on Earth.

The Australian Antarctic Division said the islands are “one of the most biologically pristine areas in the world”, featuring seals, penguins and seabirds, as well as a volcanic, glacial terrain.

The islands were added to the Unesco world heritage list in 1997. The expansion of the marine reserve means it is the largest A-class, or fully protected, area as categorised by the International Union for Conservation of Nature.

This means that very little activity can take place within the reserve, with human visitation restricted to scientific and environmental monitoring.

Environmental groups have welcomed the decision, claiming it will create a vast area for rare beaked and bottlenose whales. The whales, along with seals and seabirds, will be safe from potential threats such as oil and gas drilling, as well as commercial fishing.

“The decision to create Australia’s largest A-class sanctuary for marine life reinforces the clear science evidence of the essential role of large ‘no take’ areas in safeguarding a diversity of life,” said Michelle Grady of the Pew Charitable Trusts.

The Australian Marine Conservation Society (AMCS) said the decision provides the government with further evidence of the value of marine sanctuaries. The Coalition has scrapped management plans for a huge network of marine reserves set out by Labor, claiming that fishers were unfairly locked out of the process.

“This landmark decision showcases the benefits that large sanctuaries deliver to all of us, whether they are commercial or broader environmental benefits,” said Darren Kindleysides from the AMCS.

One thought on “Thank You, Australia”