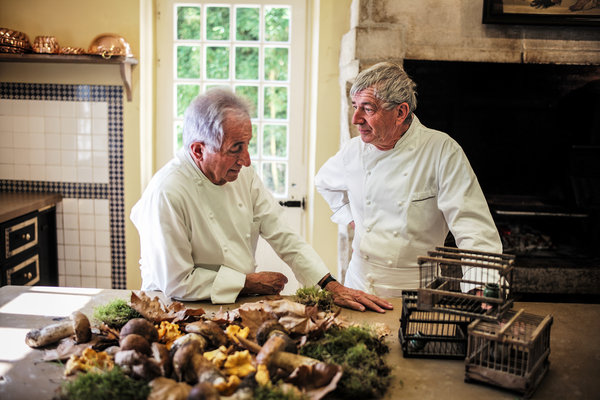 Michel Guérard, left, the chef of Les Prés d’Eugénie, and Jean Coussau, the chef of Relais de la Poste, are among a handful of chefs trying to bring the ortolan back to the restaurant menu in France. Credit Ulrich Lebeuf/M.Y.O.P for The New York Times

We do not link often to the countless stories of rhino populations being decimated due to poaching, not because they are depressing, which they are; but because there have been no breakthrough entrepreneurial conservation stories related to that tragedy. Ditto for elephants and other charismatic megafauna–overwhelmingly depressing and no solution in sight, with the rare glimmer of hope.

So, when I see an article like the one below, even though it focuses on charismatic minifauna rather than megafauna, I take note. We pay a disproportionate amount of attention to birds on this platform for reasons that should be clear to regular readers of these pages, so for now a question to all ornithologically advantaged readers: is the reference to the unpublished Canadian study at the end of the article real or bogus? If the latter, please share your knowledge through our comment section and we will provide the publisher a crowd-sourced, fact-checked update to the article.

This is one of the exceptional articles for which we provide full text because of its urgent environmental value, with the expectation that you will click through to the source to give proper credit, with thanks to the New York Times:

“The bird is absolutely delicious,” said Mr. Guérard, who recalled preparing ortolans for Mitterrand and his successor, Jacques Chirac, back when it was legal. (Mitterrand was said to linger over two ortolans in his last supper before his death in 1996, also consuming three dozen oysters, foie gras and capon.)

“It is enveloped in fat that tastes subtly like hazelnut,” Mr. Guérard said, “and to eat the flesh, the fat and its little bones hot, all together, is like being taken to another dimension.”

But the campaign has provoked environmentalists, who accuse the chefs of engaging in a publicity stunt to promote what they say is an archaic custom that will further endanger the bird, and that treats the ortolan inhumanely before it is killed.

“These chefs are totally backward; they are not living in the 21st century,” said Allain Bougrain Dubourg, the president of France’s Birds Protection League. “They aren’t doing this for gastronomy. It’s all about raising their profile.”

Mr. Ducasse, who has several restaurants around the world, had already alarmed animal-rights activists in New York City when he served about 20 ortolans during a 1995 dinner at Le Cirque that grabbed tabloid headlines.

Today, Mr. Ducasse and his confreres say their main objective is to revive a culinary tradition that dates to Roman times, when emperors sought out the ortolan’s intoxicating taste, and to pass the savoir-faire to a new generation of cooks. “We want to be able to do this so as not to lose all the beautiful things that make up the history and the DNA of French cooking,” Mr. Guérard said.

The European Union banned the hunting of ortolans and declared them a protected species in 1979 amid concerns about their survival and an outcry from environmentalists. But France waited two decades to codify the measure.

Still, many people in France continue to capture and eat the birds. Families in Landes would traditionally savor them once a year, “like a bonbon” at the end of a big lunch, eating them in total silence with a glass of Sauternes and the shades drawn, said Mr. Dutournier, a native of Landes and the head chef at Carré des Feuillants in Paris, which has two Michelin stars.

Wearing the white napkin allows diners to savor the aromas and enjoy some privacy while devouring the bird — or, critics say, hide their indulgence from the eyes of God.

Eating ortolan is also a surreptitious pleasure beyond France: The author and chef Anthony Bourdain, in his 2010 book, “Medium Raw,” described a secret, late-night meeting of French chefs in a New York restaurant to eat ortolans. “It’s sort of a hot rush of fat, guts, bones, blood and meat, and it’s really delicious,” he told Stephen Colbert in an interview.

Such extravagance can involve an uncomfortable trade-off. Poachers lure the ortolan into ground traps during its migratory flight from Northern Europe to Africa. Mr. Dubourg, the activist, said that because the birds are prized for their fat, they are kept in darkness for 21 days and are sometimes blinded, prompting them to gorge on millet and grapes. Once the ortolan’s fat has tripled in volume, the bird is drowned with Armagnac, plucked, roasted and served hot in its entirety. “Good cuisine cannot be used as an excuse for the condition these animals are kept in,” Mr. Dubourg said.

Last month, he led a group of activists into the fields of Landes, where they released scores of trapped ortolans and demanded that poachers be arrested. The police declined to take action, and a scuffle broke out between protesters and trappers.

Guests eating ortolan at a private dinner party in southwestern France after the bird was banned from restaurant menus. Credit Richard Cottenier/MAXPPP

Mr. Dubourg’s group estimates that the ortolan population fell by more than 40 percent between 2001 and 2011. About 30,000 wild ortolans are still being culled illegally in the South of France every summer, while the police look the other way, he added. A single ortolan can fetch up to 150 euros ($189) on the black market.

Mr. Coussau, the chef at the two-Michelin-star restaurant Relais de la Poste in southwest France, insisted that the birds were not treated inhumanely, and cited an unpublished Canadian ornithological study indicating that the ortolan population in Northern Europe is around 30 million. “They are hardly endangered,” he said.

Besides, Mr. Guérard added, he and his fellow chefs are seeking a waiver from the French government to serve ortolan only one weekend a year. But with all of the other problems confronting the nation, they don’t expect quick results.

He said the chefs do not want to wipe out the birds: “We just want to maintain a tradition.”

Mr. Coussau rebuffed critics who say the ortolan is an unnecessary extravagance. “There are many things that we eat that are not essential to live,” he said. “We could survive on nutritional pills if we had to.”

“But if we go down that path,” he concluded, “the notion of pleasure will disappear.”

Click here to give fair attribution to the article’s source, the New York Times.