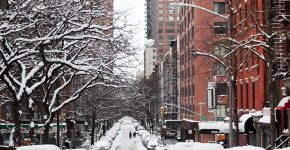 We operate in locations where there can be extreme weather (though not the white variety), so we are reminded of the value of good description of weather events.  One of our favored essayists, specifically, reminded us today with fabulous made up words and reminders of literature, all while making small talk about the weather:

The threatened Snowpocalypse missed New York, more or less, making Monday morning’s panic look slightly absurd on Tuesday afternoon, as panics do when they turn out to be unneeded. On Monday afternoon, with the storm on the way and the blizzard warnings screeching, the lines in a Manhattan supermarket stretched from the cash registers deep into the paper towels and bottled spaghetti sauces, with a sudden shortage of carts causing shoppers to clutch bottles of water and cold meats to their bosoms, as though the items were small children being kept warm from the Cossacks. Presumably, the immigrant nature of New York has given us a sort of collective unconscious of Old World flight and refugee instincts. The irrationality of the purchases might have been clear enough. Lady ahead in the line: How do you imagine that you’re going to cook all that raw meat if the power goes out; and, if it doesn’t go out, what will you really have to worry about? But you were thinking this even as you clutched your own raw meat and water to your own worried heart.

For a Canadian or two in New York—I name no names, though my wife comes to mind—it seemed a little absurd: we didn’t even call this kind of thing a snowstorm when we were kids in Canada. This is what we called “weather.” Yet what I suppose we have to call the weather establishment reinforced the alarm. “In New York City, the latest National Weather Service update hints a bit more strongly that this storm could over perform there, saying, ‘It should be a raging blizzard,’ ” read one report. It continued, “Although official forecasts say 20-30 inches for the city, a top-end scenario of three feet is still possible, which could break the city’s all-time single storm snowfall record (dating back to 1869) by 5 to 10 inches.” The report said that the N.W.S. office in Boston warned that the storm’s “central pressure will explosively deepen on Tuesday, at a rate twice that of a ‘bomb’ cyclone.” One N.W.S. forecaster said, “It’s bombogenesis, baby!” The storm was called “historic” and “crippling.” And “explosively deepening”—this is snow porn, of course, and for some reason it excites us. We like the Armageddon until it’s here.

The ruling deity of this form of panic and pensive regret is Lewis Carroll’s White Queen, from “Through the Looking-Glass.” The White Queen, in some Joseph Campbell realm of archetypes, is indeed surely a variant of Hans Christian Andersen’s Snow Queen, and so perhaps it’s no wonder that in Carroll’s rendering she governs the Kingdom of the Snow That Fell Before It Started Falling. Here’s the famous passage:

The Queen began screaming so loud that she had to leave the sentence unfinished. “Oh, oh, oh!” shouted the Queen, shaking her hand about as if she wanted to shake it off. “My finger’s bleeding! Oh, oh, oh, oh!”

Her screams were so exactly like the whistle of a steam engine, that Alice had to hold both her hands over her ears.

“What IS the matter?” she said, as soon as there was a chance of making her heard. “Have you pricked your finger?”

And then, when she does:

“But why don’t you scream now?” Alice asked, holding her hands ready to put over her ears again.

“Why, I’ve done all the screaming already,” said the Queen. “What would be the good of having it all over again?”

The Queen’s final remark is the motto of the modern American media, apropos of pretty much anything. We get hysterical at first, and by the time the snow explosions don’t take place, or it emerges, say, that Benghazi isn’t a scandal, or we experience the American Ebola epidemic that never happened—Why, We’ve Done All the Screaming Already! With our doom prophets, no one even recalls the snow warning that went wrong, the super predators who didn’t appear.

Still, though snow hysteria may have its absurdities, it’s part of social sanity…