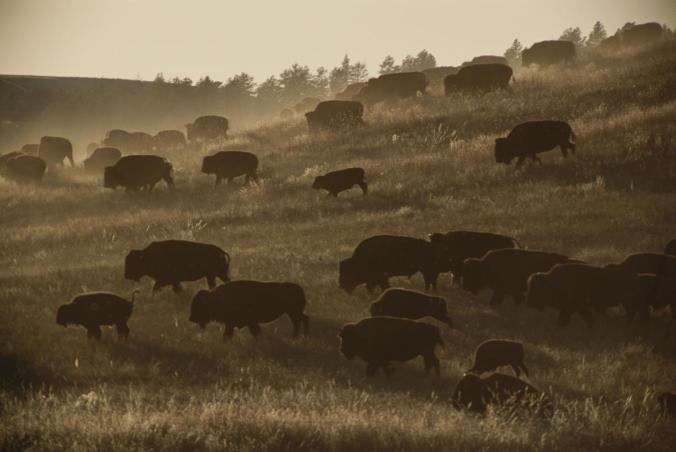 Bison, like these at Custer State Park, in South Dakota, were central to the Plains Indians. But when the U.S. National Parks Service tried to reintroduce them to Lakota lands, it tore the community apart. PHOTO: SARAH LEEN, NATIONAL GEOGRAPHIC CREATIVE

Rewilding is the idea that, having extirpated many species, by returning large animals and birds like the California condor to the landscape, we can restore key ecosystem functions. The most famous example is probably the reintroduction of grey wolves to the northern Rockies and the Mexican grey wolf to the desert Southwest in the mid-late’90s. There’s a phenomenon called trophic cascade, which means that a large predator like a wolf has a regulatory effect on the entire food chain. In Yellowstone, the return of wolves has meant that the elk can’t be fat and lazy and start to browse in a different fashion, which in turn allows aspen and beavers to come back.
If 20th-century conservation was about drawing lines on a map and saying, this is a park or preserve, 21st-century conservation is about filling in those lines, bringing back animals that have been extirpated.

Rewilding, the need and benefits of having places that are off the map, modern day cave woman Lynx Vildern make for some pages of Satellites In The High Country: Searching For The Wild In The Age Of Man, by Jason Mark, cofounder of the largest urban farm in San Francisco.

Excerpts from an interview with National Geographic:

Edward Abbey wrote, “Wilderness is not a luxury but a necessity of the human spirit.” Is that a sentiment you share—and why?

The spirit of Ed Abbey hovers over this book in large measure. I think we need wild places more than ever in what some are calling the Anthropocene or Age of Man. We need wilderness for ecological reasons as a safe harbor for plants and animals at a time when global climate change is increasingly dislocating them from their historical ranges and habitat.

We also need wilderness as a psychological tonic—the benefit of having places that are off the map. With Google Earth and GPS, to still have places where humans are not dominating the landscape has real psychological value. In the spirit of Abbey, I would also say that wilderness has got civic or political values. Liberty benefits from having places beyond the reach of corporations and the power of the government.

Why did you call the book Satellites in The High Country?

The phrase comes from a scene in the last pages of the book where I am shadowing some young men on an Outward Bound course in the Colorado Rockies. We were at about 8,000 feet, at night, the firmament was crystal clear. I looked up in the sky and saw what looked like a star on the move—a satellite tracking across the sky. It became a good five-word encapsulation for the idea that there’s nowhere left, including the night sky, that’s pristine anymore. The human insignia is everywhere. Yet, as I say in the closing words of the book, Earth remains a beautiful mystery.

2 thoughts on “Leaving the Map Behind”