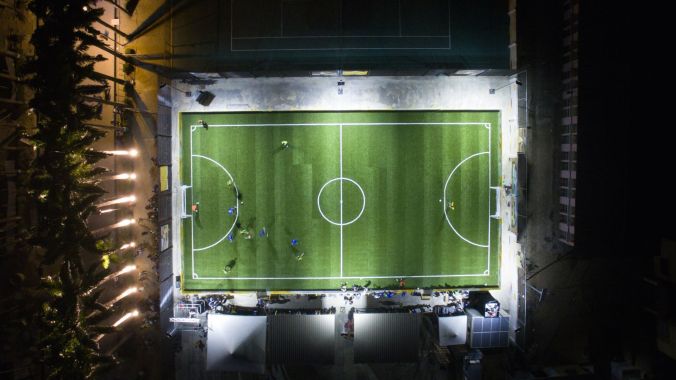 There’s a host of ingenious solar projects impacting the developing world. Energy’s role in political, social, and economic development is being highlighted more than before and being energy-smart is the blueprint to a sustainable future. Clean energy is the way forward. And Lagos has an example. In the name of soccer.

Africa is already waking up to the possibilities that renewable energy provides, the African Union has pledged a $20 billion investment over the next decade. In East Africa, pay-as-you-go solar energy services arealready proving a mainstream success. In West Africa, things are still at an early experimental stage. One such experiment is a solar-powered football pitch which also uses kinetic energy generated by footballers playing.

Located in at a teacher’s college in Lagos, Nigeria’s commercial center, the innovative soccer pitch was launched last year in a three-way collaboration between energy giant Shell; music star Akon, who has been championing solar energy on the continent; and Pavegen, a UK-based start-up which has a target of providing low-cost renewable energy solutions to Africa’s electricity problems.

Perhaps the most interesting technological feature of the solar-powered pitch—only the second ever launched across the world (the first was launched in Brazil in 2014)—is that it combines both kinetic and solar energy to produce electricity.

One thought on “Footstep by Footstep”