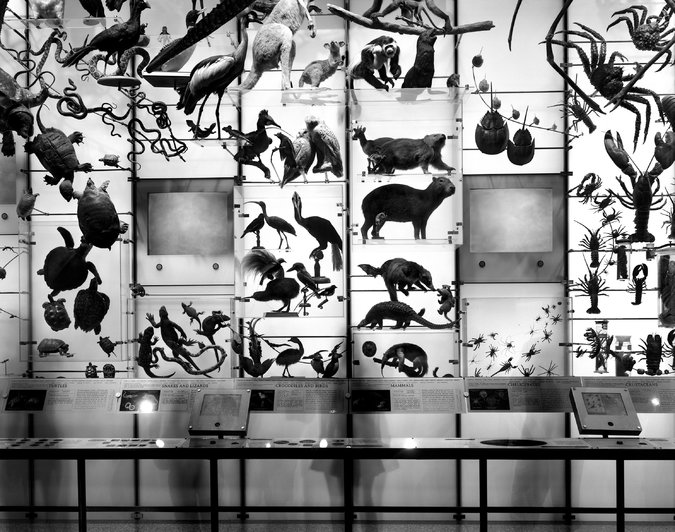 The Spectrum of Life, at the American Museum of Natural History, an evolutionary trip through the amazing diversity of life on Earth. Credit Matthew Pillbury/Benrubi Gallery

We’ve said often that we’re die-hard supporters of natural history museums before, and even quite recently. So it’s nice to see yet another article championing the role these institutions can have in scientific discoveries, education, and more. Here’s an op-ed in last Sunday’s New York Times by Richard Conniff, highlighting some threats to some US museums:

When people talk about natural history museums, they almost always roll out the well-worn descriptive “dusty,” to the great exasperation of a curator I know. Maybe he’s annoyed because he’s spent large sums of his museum’s money building decidedly un-dusty climate-controlled storage sites, and the word implies neglect. (“Let me know,” the curator advises by email, “if you want to hear me rant for an hour or so on this topic.”)

Worse, this rumored dustiness reinforces the widespread notion that natural history museums are about the past — just a place to display bugs and brontosaurs. Visitors may go there to be entertained, or even awe-struck, but they are often completely unaware that curators behind the scenes are conducting research into climate change, species extinction and other pressing concerns of our day. That lack of awareness is one reason these museums are now routinely being pushed to the brink. Even the National Science Foundation, long a stalwart of federal support for these museums, announced this month that it was suspending funding for natural history collections as it conducts a yearlong budget review.

It gets worse: A new Republican governor last year shut down the renowned Illinois State Museum, ostensibly to save the state $4.8 million a year. The museum pointed out that this would actually cost $33 million a year in lost tourism revenue and an untold amount in grants. But the closing went through, endangering a trove of 10 million artifacts, from mastodon bones to Native American tools, collected over 138 years, and now just languishing in the shuttered building. Eric Grimm, the museum’s director of science, characterized it as an act of “political corruption and malevolent anti-intellectualism.”

Other museums have survived by shifting their focus from research to something like entertainment. A few years ago, in the Netherlands, which has a rich tradition of scientific collecting, three universities decided to give up their natural history collections. They’re now combined in a single location, at the Naturalis Biodiversity Center in Leiden, and the public displays there struck me on a recent visit as a sort of “Animal Planet” grab bag, with cutout figures of a Dutch version of Steve Irwin steering visitors, with cartoon-balloon commentary.

The pandering can be insidious, too. The Perot Museum of Nature and Science in Dallas, which treats visitors to a virtual ride down a hydraulic fracturing well, recently made headlines for avoiding explicit references to climate change. Other museums omit scientific information on evolution.“We don’t need people to come in here and reject us,” Carolyn Sumners, a vice president at the Houston Museum of Natural Science, explained to The Dallas Morning News.

Even the best natural history museums have been obliged to reduce their scientific staff in the face of government cutbacks and the decline in donations following the 2008 economic crash. They still have their collections, and their public still comes through the door. But they no longer employ enough scientists to interpret those collections adequately for visitors or the world at large. Hence the journal Nature last year characterized natural history collections as “the endangered dead.”

This view of the natural history museum as moribund is a terrible misunderstanding, on many counts. Natural history museums do indeed store specimens from millions or even billions of years in the past. (They even store dust, only it’s called “pollen.”) Their collections, one museum director told me, are where “we have placed our entire three-dimensional record of the planet that sustains us.” But these collections are less about the past than about our world and how it is changing. Sediment cores like the ones at the Illinois State Museum, for instance, may not sound terribly important, but the pollen in them reveals how past climates changed, what species lived and died as a result, and thus how our own future may be rapidly unfolding.

These specimens routinely affect our lives in ways we barely recognize. In the summer of 1996, for instance, a New York developer named Ingram S. Carner noticed that the sugar maples in the Greenpoint neighborhood of Brooklyn were struggling. He collected a suspect beetle, and Richard Hoebeke, then an entomologist at Cornell University, soon identified it as an Asian long-horned beetle, the first to be found in this country. If it had gone undetected, a study by the United States Forest Service later estimated, it could have killed a third of the trees in cities nationwide. Instead, the discovery touched off a major campaign to contain the invasion at a handful of sites. The unsung hero? A natural history museum: Dr. Hoebeke was able to identify the species so quickly only because Cornell happened to have a single specimen from China in its collections.

Natural history museums are so focused on the future that they have for centuries routinely preserved such specimens to answer questions they didn’t yet know how to ask, requiring methodologies that had not yet been invented, to make discoveries that would have been, for the original collectors, inconceivable.

Read the rest of the original article from April 1, 2016 here.