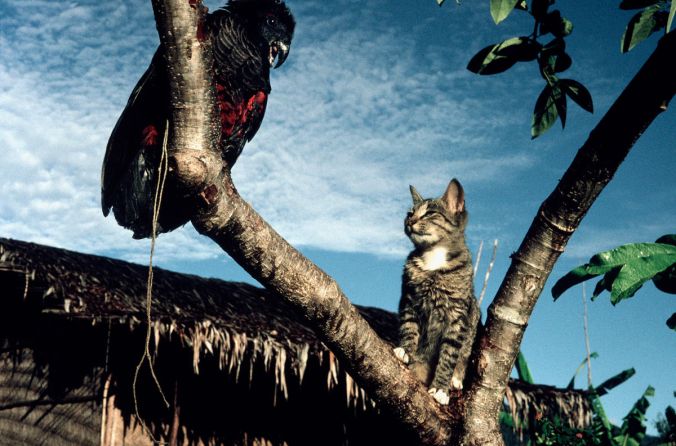 A domesticated cat and a native tropical bird, in Papua New Guinea. Environmentalism has long been a nostalgic enterprise, but the unspoiled past that it aspires to looks increasingly like an illusion. PHOTOGRAPH BY LEONARD FREED / MAGNUM

If you have been reading our blog for any stretch of time you would be aware that we believe in pristine nature, and the importance of its conservation. We do not spend alot of time picking nits about the definition of pristine nature, but from time to time we are reminded that details, aka reality, is in need of fact-checking:

THERE’S NO SUCH THING AS PRISTINE NATURE

About twenty thousand years ago, in the latter days of the Pleistocene epoch, a cat-sized marsupial from New Guinea travelled by boat or raft to the rifle-shaped island of New Ireland. The South Pacific voyage of the northern common cuscus was likely involuntary, and likely ended—unhappily for the cuscus—in a cooking fire. But it was momentous: cuscus bones excavated from the floor of a New Ireland cave are some of the oldest archeological evidence of humans transporting an animal species to a new environment.

The typical story of human effects on other species begins with the passenger pigeon, or the famously unfortunate dodo, but archeologists know better. “These processes have been under way for thousands of years, and species distributions have undergone layer upon layer of change,” Nicole Boivin, the director of the Max Planck Institute for the Science of Human History, in Germany, told me recently. “What we see now are the cumulative effects of those changes.” In a review published today in the Proceedings of the National Academy of Sciences, Boivin and her co-authors draw together new and old evidence for our long reshaping of the biosphere.

Even before the pioneering voyage of the cuscus, the authors write, humans burned tropical rain forests to encourage the growth of useful plants and draw game into the open. Recent studies have bolstered the hypothesis that human hunting contributed to the extinction of Pleistocene animals ranging from the woolly mammoth to the giant wombat to the North American camel. The rise of agriculture saw the domestication of many types of flora and fauna, which were dispersed worldwide. (Some newly mobile creatures were useful to humans, but others were emphatically not: studies of Neolithic human skeletons have found ancient DNA from tuberculosis and bubonic-plague bacteria.) Adventurous prehistoric humans transformed the ecology of previously isolated islands, deliberately introducing not only toothsome marsupials but also pigs, chickens, dogs, and crops such as corn and avocado—and accidentally introducing rats, house mice, and Helicobacter pylori, a bacterium that causes stomach ulcers. A recent study of forty-one Pacific islands found that, between initial human colonization and European contact, two-thirds of the populations of large land birds were driven extinct by hunting and deforestation. (The dodo, by comparison, was almost lucky. It thrived on the island of Mauritius until the late sixteenth century, when hungry Dutch sailors, along with introduced rats, dogs, and pigs, kicked off its decline.)

Boivin emphasized that prehistoric humans’ effects on the biosphere were small compared with those of the planet’s 7.4 billion modern humans. “What we see today is truly monumental,” she said. But Boivin hopes that the story of our ancient past will lend perspective to current conservation efforts. As she and her co-authors conclude, “ ‘Pristine’ landscapes simply do not exist and, in most cases, have not existed for millennia.” Although modern-day environmentalists generally acknowledge the scale and ubiquity of human impacts on the planet, environmentalism has long been a nostalgic enterprise, one that aspires to a past where passenger pigeons still fly and dodos still waddle, figuratively if not literally…