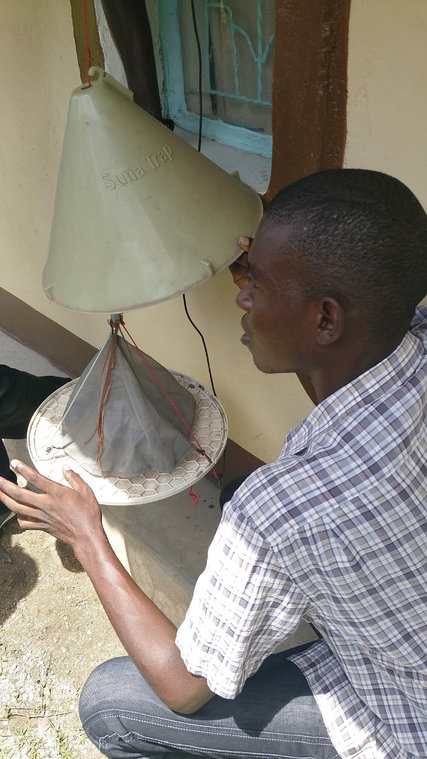 A mosquito trap that runs on solar electricity and mimics human odor as bait. Credit Alexandra Hiscox via NYTimes

We’ve seen solar power used for many things here, but not yet as a source of power for insect trapping.  On the island of Rusinga in Lake Victoria, Kenya, scientists from the Netherlands, Kenya, and Switzerland tested new traps that use electricity from solar panels to release a chemical similar to the carbon dioxide we exhale (which attracts mosquitos) and a blend of chemicals that mimic human odor (which also draws in the blood-suckers) as bait for the disease-bearing biters. From the New York Times:

Although the traps appeared quite effective at lowering mosquito populations, they had some significant drawbacks.

Because they need power from rooftop solar panels, they are relatively expensive. Still, the panels appealed to residents who could also use them to power a light bulb or charge a cellphone.

Also, the traps — which resemble lampshades and hang just outside the house — lured in Anopheles funestus mosquitoes, which are the most important malaria vector on Rusinga Island in Lake Victoria, where the test was conducted. But they did not attract Anopheles gambiae or Anopheles arabiensis, which are much more important malaria vectors in most of Africa, where more than 400,000 children die of the disease each year.

Also, the traps needed regular rebaiting with a blend of five chemical constituents of human odor along with a chemical that mimicked the carbon dioxide plume created by human breath.

Mosquito traps releasing carbon dioxide are available in the United States, but they can cost hundreds of dollars; can sometimes require propane tanks, electricity or dry ice; and may not be effective.

The test was led by scientists from Wageningen University in the Netherlands, along with Kenyan and Swiss scientists.

We're excited to introduce decaffeinated beans from the Tres Ríos region to our USA market! At first we'd thought of a sloth for this label, but ended up going for an ironic hummingbird instead.
Starting the new year strong with some espresso and fresh snow!
Happy holidays from the Organikos family--we hope you have a season of love, joy, and plenty as we approach the year's end!
Coffee makes a great last minute gift for the holidays. From our hands to yours. Free shipping on orders 3 lbs and over.
%d bloggers like this: