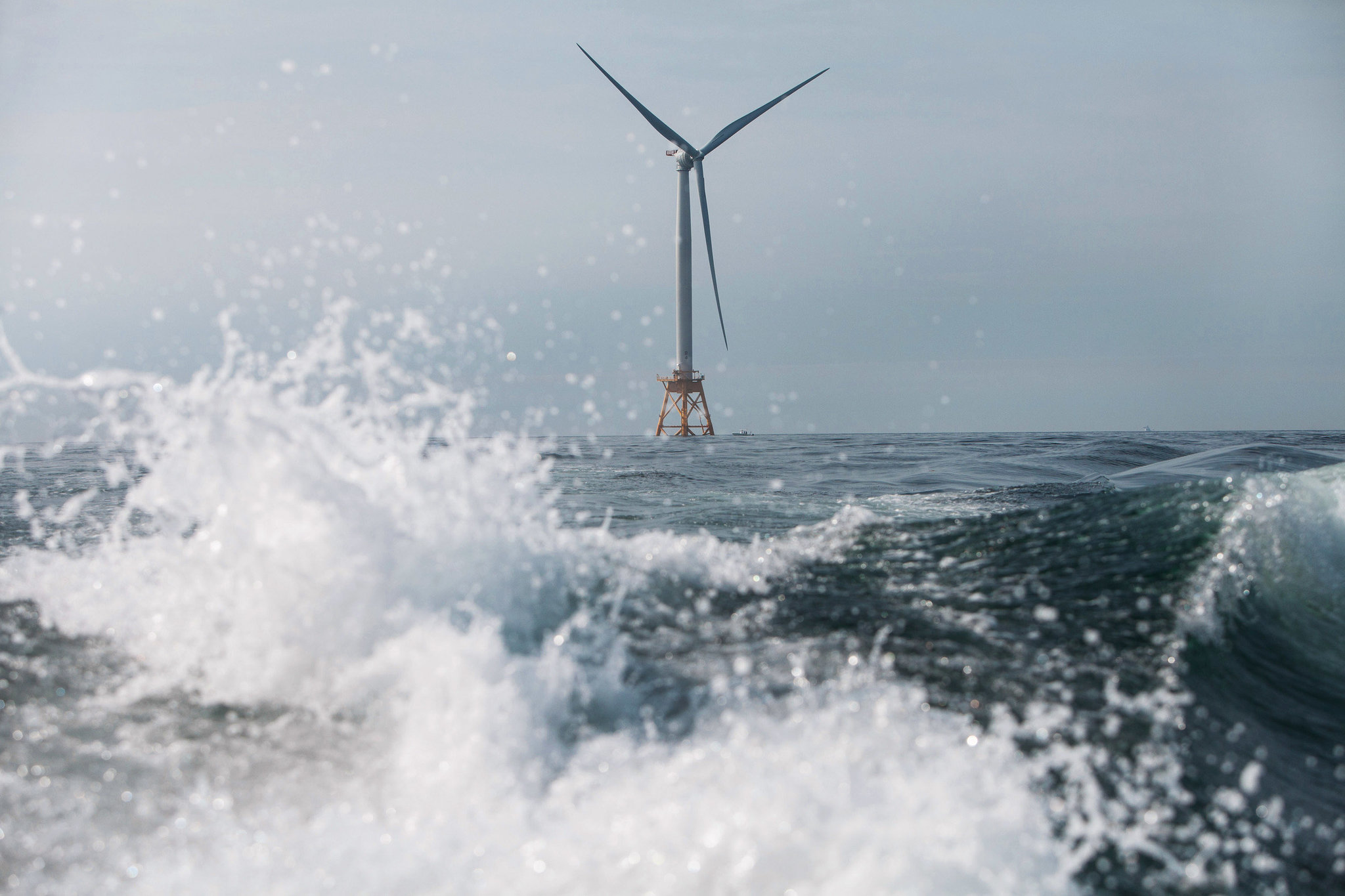 One of five turbines that make up the Block Island Wind Farm, the first offshore wind farm in the United States, off the Rhode Island coast. Credit Kayana Szymczak for The New York Times

Less than a month ago we shared the story in WIRED about the Block Island Deepwater Wind farm, and now, construction is finished! That may seem like trivial news to Europeans with coastline who have been enjoying offshore wind power for years now, but given that this is the first project of its kind in the US, it’s an exciting sign of progress to come in renewables for a nation with one of the largest carbon footprints. Justin Gillis reports for the New York Times:

BLOCK ISLAND, R.I. — The towering machines stand a few miles from shore, in a precise line across the seafloor, as rigid in the ocean breeze as sailors reporting for duty.

The blades are locked in place for now, but sometime in October, they will be turned loose to capture the power of the wind. And then, after weeks of testing and fine-tuning, America’s first offshore wind farm will begin pumping power into the New England electric grid.

By global standards, the Block Island Wind Farm is a tiny project, just five turbines capable of powering about 17,000 homes. Yet many people are hoping its completion, with the final blade bolted into place at the end of last week, will mark the start of a new American industry, one that could eventually make a huge contribution to reducing the nation’s climate-changing pollution.

The idea of building turbines offshore, where strong, steady wind could, in theory, generate large amounts of power, has long been seen as a vital step toward a future based on renewable energy. Yet even as European nations installed thousands of the machines, American proposals ran into roadblocks, including high costs, murky rules about the use of the seafloor, and stiff opposition from people who did not want their ocean views marred by machinery.

“People have been talking about offshore wind for decades in the United States, and I’ve seen the reaction — eyes roll,” Jeffrey Grybowski said last week in an interview on Block Island. “The attitude was, ‘It’s not going to happen; you guys can’t do it.’”

Mr. Grybowski and the company he runs, Deepwater Wind of Providence, R.I., have now done it. They had a lot of help from the political leadership of Rhode Island, which has seized the lead in this nascent industry, ahead of bigger states like New York and Massachusetts.

Now, offshore wind may be on the verge of rapid growth in the United States.

Using a law passed by a Republican-led Congress in 2005 and signed by President George W. Bush, the Obama administration has been clarifying the ground rules and leasing out large patches of the ocean floor for wind-power development. Nearly two dozen projects are on the drawing board, with some potentially including scores of turbines.