For the type of jaw-dropping  sights that Torres del Paine National Park in Chile has to offer, it is only fair to know a bit of geological history that formed these towering, sheer ridges and deep, mirrored lakes. Located in the southern tip of the Andes of South America, the landscape of the park is owed to earth movements which occurred 12 million years ago and the gradual glacial erosion thereafter, which formed the “torres” (towers) measuring more than 2,200 meters in altitude. The 2,422 square kilometer area was established as a park in 1959; since 1978 it has been part of UNESCO’s Biosphere Reserve system.The park encompasses ancient forests, glaciers, lakes, rivers and fjords, with fauna including guanacos (sort of like llamas), foxes, pumas and a diverse array of birds, such as the Darwin’s rhea (flightless, ostrich-like creatures), Andean condor and Chilean flamingo. 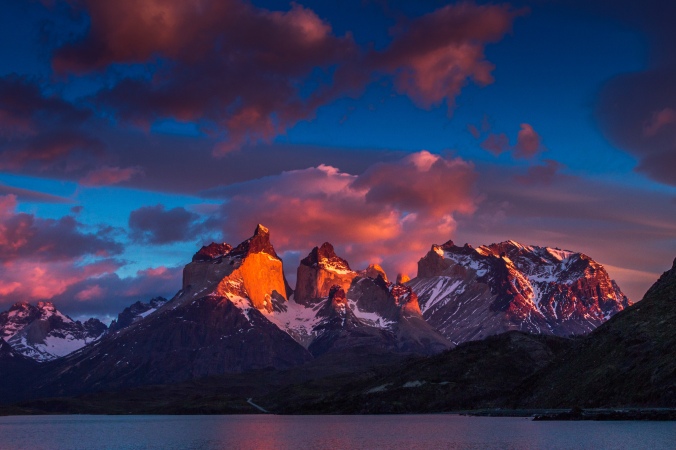 The primary sights of the park are the Paine Towers, Los Cuernos (the horns), French Valley, Grey Glacier, Grey Lake, Salto Grande and Salto Chico (big and little waterfalls), but many people find that once there, they realize that there are other attractions of equal splendor. For trekking fans, the W Trek and the Paine Circuit offer a strenuous challenge while traversing through the dramatic topography. On the other hand, kayaking in Lake Grey is another option for those who want a more relaxing experience that reveals icebergs up close and personal.

For those considering a visit, it is recommended to go in December to avoid the crowds, the harsh winds (emphasis on wind – Patagonia is known for bitter breezes), and the more extreme cold. Peak tourist season is January-February, but for lovers of colorful fall foliage, May is the best month to witness the colorful transformation – which I can only presume is breathtaking. Remember that the southern hemisphere has opposite seasons from the northern!