Thanks to Wired author Charley Locke for his story MEET THE OBSESSIVE MUSHROOM HUNTERS OF NEW YORK CITY:

ON A PARTICULARLY gorgeous Sunday in October, 30 explorers with the New York Mycological Society met at a cemetery in Brooklyn to hunt for mushrooms. 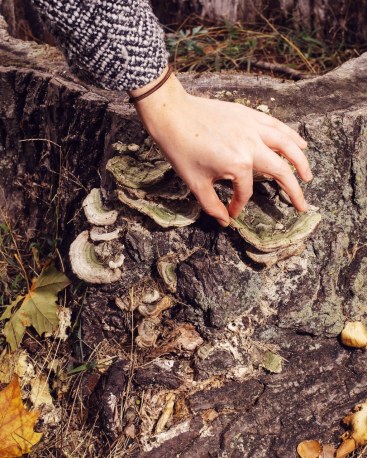 They rummaged through leaves, carefully inspected the headstones, and gingerly reached into tree trunks, hoping to find something amazing. A turkey tail, perhaps, or hen-of-the-wood. “It was like a scavenger hunt,” says Zack DeZon, a photographer who joined them on the search. “It struck me as the analog equivalent of Pokemon Go.”

DeZon is not particularly enamored with fungus, but a mushroom-obsessed friend’s Instagram feed piqued his interest. The fellow pointed him toward the Mycological Society which has since 1962 catered to those with an interest in mycology and mycophagy. The society, created by the composer John Cage, has 430 members and meets throughout the year to find mushrooms, eat mushrooms, and discuss mushrooms.

“People are interested in mushrooms primarily for eating, but when people join the club, often, their interests expand: ecology, taxonomy, medicinal mushrooms,” says Tom Bigelow, the president of the society. In the past seven years, the society has recorded more than 600 species throughout the city.

Anyone with an interest in such things is free to join a hunt during mushroom season, which peaks between July and October…