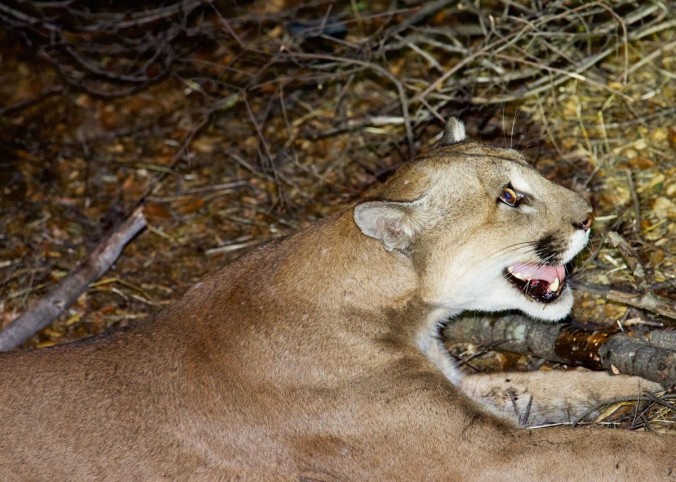 I favor a walk in the woods where pumas feel naturally at home. That said, the world has been changing faster than we like, and faster than pumas can adapt. We have had so many wildcat stories in these pages since we started in 2011, it is impossible to count at this point; also not possible to link back to one that matches the content of Dana Goodyear’s wow piece in the upcoming issue of the New Yorker:

Are the city’s pumas dangerous predators or celebrity guests?

It was drizzling and gray, late fall, on the old Rickards Movie Ranch, high in the Santa Monica Mountains, in rural, red-state western Malibu.Bleached skulls were tacked to the outside wall of a stage-set saloon; rusting wagon wheels leaned at angles. A hand-painted sign announced a “Public Hanging, 5PM.” Inside the saloon—the shooting location of TV Westerns and Gravy Train commercials and Playboy spreads—a secret meeting was under way.

“This cat is dangerous,” a woman said, her voice carrying tremulously over the saloon door. “He should not be part of the gene pool.”

“Absolutely! Get him out of here,” a man said.

“For years and years, I’ve lived like this,” another woman said. “Now I’m afraid.”

The saloon doors swung open, and Wendell Phillips beckoned me inside, where nine people sat around a large table, in a room crowded with memorabilia of the Old West: hides, brands, a full-mount coyote. Phillips, who is sixty-seven, with a bald head and a sizable mustache, is a former swat-team member and now has a law practice defending police officers. He and his wife, Mary Dee Rickards, were leading the meeting, for the victims of a mountain lion known as P-45.

P-45, the King of Malibu, is a hundred-and-fifty-pound male with golden eyes and mittlike paws who dominates the western swath of the Santa Monicas. After killing an alpaca at a Malibu winery in late 2015, he was captured and fitted with a G.P.S. collar by the National Park Service, which designated him the forty-fifth subject in a long-running study, led by a wildlife ecologist named Seth Riley, on the mountain lions of Los Angeles. (The “P” comes from Puma concolor, the species whose common names include puma, panther, catamount, cougar, and mountain lion.) Since P-45 was collared, according to Phillips, he has killed some sixty goats, sheep, llamas, and alpacas, a miniature horse, and a four-hundred-and-fifty-pound heifer: members of the class of rustic pet known as “hobby animals.” Gallingly, he has eaten little—a nibble of heart meat here, a nip of scrotum there. Except in the case of pygmy goats, for which he has a taste, he seems to kill for sport.

Rickards, who has short blond hair and a cheerful manner, grew up on the ranch and runs a cat rescue there. She and Phillips have horses and dogs and, until recently, had alpacas. Then one night P-45 jumped into the alpaca pen, killing two of them. When it happened again last spring, and three more died, Phillips gave away the rest of the herd and turned his attention to pursuing the culprit. To Phillips, P-45 is a sociopath, a freak—“the John Wayne Gacy of mountain lions.”

The Santa Monica Mountains extend from the Pacific Coast through the Hollywood Hills, to end in Griffith Park. Urban though Los Angeles is, its mountains are furrowed with densely vegetated canyons full of deer and coyotes, cactuses, live oaks, wheeling hawks—a patchwork of public and private holdings claimed both by top carnivores and by their human counterparts.

The real estate is increasingly contested. At some two hundred and forty square miles, the range is the perfect size for one or two dominant males and several females, along with their young. The National Park Service study is currently tracking ten mountain lions in the area, including three breeding males. There is also an unknown number of uncollared lions. Living at such close quarters intensifies the lions’ natural territorialism; in this population, the leading cause of death is conflict with other lions. But adolescent lions who set out in search of their own hunting grounds often come to an impasse. The range is bounded by the Pacific Ocean to the south and the Hollywood Freeway (the 101) to the north, and bisected by the 405 between Brentwood and Bel Air. Just as the roads keep native lions in, they also keep outside lions from entering, and first-order inbreeding has become common. Lush but confined, the mountains are a cushy prison, a Hotel California for apex predators, whose future is threatened by a double deficiency: not enough space for a group of lions with not enough genetic differences among them…