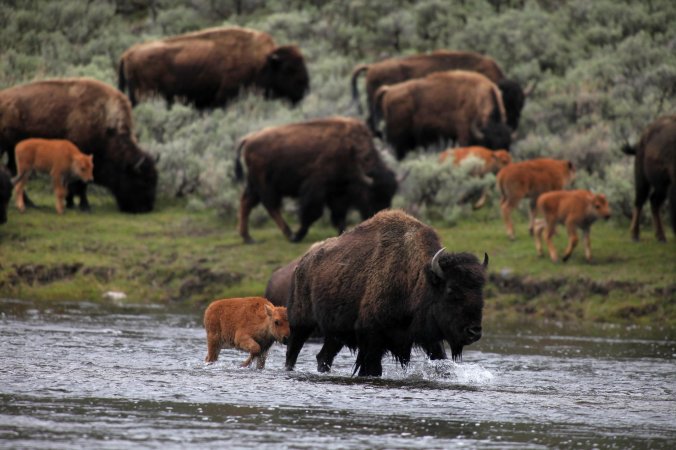 Bison and their calves in Yellowstone National Park. A fossil found in Canada provides the oldest evidence of bison ever discovered in North America. Credit Nicole Bengiveno/The New York Times

We love watching the return of this beast, so this story in today’s Science section is our kind of story:

When did North America become a home where the ancestors of buffalo roamed? Between 195,000 and 135,000 years ago, according to a study published Monday that reports on the oldest fossil and genomic evidence of bison on the continent.

Scientists have set out to chronicle when the massive, furry beasts first crossed into North America from Asia via the Bering land bridge because that event was the beginning of a striking change in the ecology of the continent. They refer to it as an invasion because once the bison arrived, they thrived everywhere and began competing with the horses and mammoths that had grazed the Great Plains for millions of years.

“The only other invasion of North America that has had such an ecological and environmental impact has been us,” said Beth Shapiro, an evolutionary molecular biologist at the University of California, Santa Cruz, and a co-author of the paper, which appeared in the Proceedings of the National Academy of Sciences.

In the millenniums that followed, the ancient bison evolved into the iconic American buffalo we know today.

Dr. Shapiro worked with Duane Froese, an earth scientist from the University of Alberta in Canada and the lead author of the paper, to construct the chronology of the bison colonization.

One key to narrowing down when the bison arrived came from a serendipitous find made by Dr. Froese’s colleague Alberto Reyes, a geologist from the University of Alberta. In 2006 while studying ancient volcanic ash buried in the northern Yukon in northwestern Canada, Dr. Reyes stumbled across a bone jutting from the frozen mud near the ash layer…