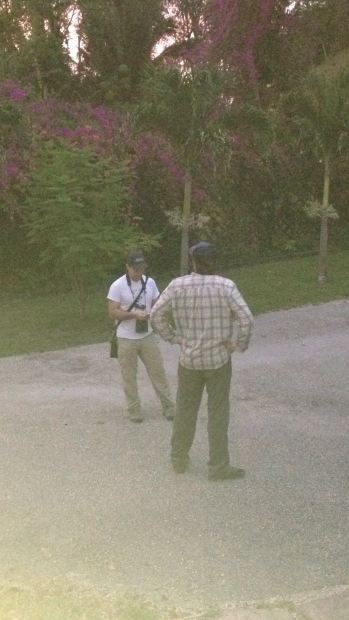 On day two in Belize with Team Sapsucker introductions are due. The photo to the left, taken at about 5am today in front of Chan Chich Lodge’s reception area, shows two of them. The best information I could find to share with you about Andrew Farnsworth is on Songbird SOS Productions, where he says:

“I like the challenge of trying to figure out how to go birding when there’s a traffic jam on first avenue. It’s cool to be able to study birds in a city… Some people have seen technology as the end of all things natural, but there’s a whole other side to it that gives us access to a world that we would otherwise not have seen.”

Andrew Farnsworth is working with new technology to advance the intensive acoustic analysis required to identify the night calls of migratory birds. With colleagues at Cornell, he is embarking on an ambitious project called BirdCast that will synthesize night flight calls, eBird data visualizations, and the clouds of migrating birds detected at night by weather radar stations. For the first time ever, real-time predictions of bird migrations will provide a window into the world of migration at a scale previously unimaginable. Farnsworth is hopeful, as this new vision of migratory behavior could ultimately be used to prevent the deaths of millions of birds.

Andrew Farnsworth is currently a Research Associate at the Cornell Lab of Ornithology, where he works with new technology to advance the intensive acoustic analysis required to identify the night calls of migratory birds. He also is on the board of the New York City Audubon.

At 5am the ambient light does not allow a phone camera to take a vivid photo, but next I will introduce Brian Sullivan (on the right in the photo above) who, according to his eBird bio, has observed 2,050 species of birds, 782 with photos and 115 with audio; and further on the same site you learn that:

Brian has conducted fieldwork on birds throughout North America for the past 25 years. Birding travels, photography, and field projects have taken him to Central and South America, Australia, Antarctica, the Arctic, and across North America. He is a co-author of several books including: Better Birding—Tips, Tools, and Concepts for the Field; Offshore Sea Life ID Guide: West Coast; Offshore Sea Life ID Guide: East Coast; The Crossley ID Guide: Raptors; and the forthcoming Princeton Guide to North American Birds. Brian is renowned for lifting weights when on conference calls, and for his undying love for all things raptor.

Rounding out the team are Steve Kelling (left, above) and Roni Martinez (yes, the shirt says eBird). According to the website of the Cornell Lab of Ornithology Steve is the:

Steve Kelling has always had a personal interest in birds and bird watching, which began while growing up along the Delaware Bay shore in Cumberland Co New Jersey. From this beginning he has had a long interest in organizing the rich information resources of field observations of birds gathered by bird-watchers into a cohesive data resource for inventorying the abundance and distribution of wild bird populations.

Steve first came to the Cornell Lab of Ornithology (CLO) in 1997 from the Applied and Engineering Physics program at Cornell University to work on the creation of BirdSource. A joint program with Audubon, the goal of BirdSource was to develop Internet applications that engage bird-watchers in citizen science projects focused on birds.

At the Cornell Lab of Ornithology he is responsible for managing an extremely dedicated group of technology professionals who are bringing advances in Information Science (IT) to the field of Ornithology.

Steve’s primary interests and responsibilities revolve around four broad topics: the development of Internet data gathering tools for observational-based monitoring projects, the use of novel digital library strategies to create global communities of interested users centered around primary scientific references, the organization of the rich data resources of the bird-monitoring community and integrating these resources within existing bioinformatic infrastructures, and using unique computer science strategies to analyze the distribution and abundance of wild bird populations.

I would guess Roni appreciates how he was introduced in an article in Audubon Magazine by Martha Harbison which we linked to in an earlier post:

…The trip upriver took us another hour or so, the labored whine of the skiff’s outboard motor following us as we passed hundreds of drowned trees jutting skyward from the water and verdant riverbanks. Egrets, cormorants, and Anhingas eyed us suspiciously while a Double-toothed Kite wheeled overhead. The water was glassy flat, the current so sluggish that the river seems caught in stasis. At one point, Roni Martinez, a Belizean bird guide and one of two founders of Scarlet Six Biomonitoring Team, pointed out a tapir on the far bank. At first it looked like any other dead log—and then it lumbered up the incline and disappeared into the forest. (Editor’s note: Scarlet Six Biomonitoring Team changed its name to Belize Bird Conservancy after this issue of Audubon magazine went to print.)…