The New World, as the Americas are often called, was new to the Europeans–aka explorers, pilgrims, pioneers, settlers, colonialists, conquistadors–but of course was the long time homeland to a diverse mix of indigenous people from the very north of the hemisphere all the way down to Tierra del Fuego.For more than five centuries, conflict has defined most of the history between the New people and the people who they encountered. Attempts at reconciliation are not new, but serious and long-lasting efforts have not been the norm. 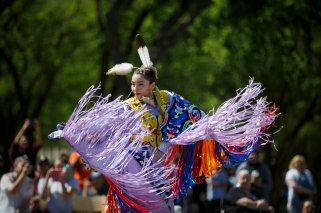 Jennifer McGillivary, a nursing student, was in a program for first-year aboriginal arts-and-science students. Credit Cole Burston for The New York Times

Earlier this week we linked out to reporting from Alaska on a related topic. Catherine Porter adds A College Built for Canadian Settlers Envisions an Indigenous Future, an excellent article about the challenges of reconciliation in higher academia,  with unusually poignant photography.

Bob Badger, the university’s First Nations and Metis cultural coordinator, set up a tepee before the graduation powwow. Credit Cole Burston for The New York Times

Cole Burston’s images capture color and energy associated with ceremonial tradition, as well as grace and wisdom of the ages. The article does not minimize the challenges but gives a sense of hope:

…“These are the changes the whole country needs to make,” said Blaine Favel, the former grand chief of Saskatchewan’s 74 First Nations, or indigenous groups. He was appointed the University of Saskatchewan’s chancellor in 2013 — an act of reconciliation in itself, he added.

“It hopefully will reverse and remedy the damage done by residential schools,” he said.

The University of Saskatchewan and its president seem, at first blush, unlikely candidates to lead this movement.

Mr. Stoicheff, 60, who calls himself “as white as you get,” arrived on campus in 1986 from Toronto as an English professor. He had a doctoral thesis on Ezra Pound, a passion for playing acoustic guitar and admittedly no knowledge on aboriginal issues. But he quickly learned that Saskatchewan was home to a large aboriginal population, and that it had festered with racial tension since Canadian troops quashed the North-West Rebellion in 1885.

Just one month into his presidency in October 2015, Mr. Stoicheff became co-chairman with Mr. Favel of the country’s first university forum on reconciliation.

“If it’s not going to be us in a province like this, leading the universities’ response to the Truth and Reconciliation Commission, who is it going to be?” Mr. Stoicheff said. “If not now, when?”