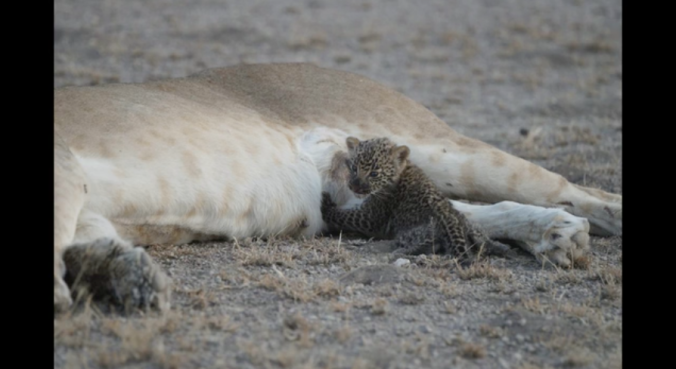 The more time we spend at Chan Chich Lodge the more we see the seasonality of birth patterns in the wild. There clearly seems to be a “baby season”, that starts with the cats and moves down the food chain to their mammalian prey, as well as birds. Although no photo captures, several jaguar cubs were sighted earlier in the year, followed by dozens of fawns and baby collared peccary. Even the Gallon Jug Farm has welcomed 4 baby horses to the fold, with a fifth on the way…but we’ll talk about that another day.

This unusual news from Panthera.org, an important Big Cat Conservation NGO who uses our 30,000 acres as part of their Jaguar Corridor research, perhaps makes a little bit of sense within the context of those patterns.

We thank Susie Weller Sheppard for sharing these field notes.

Earlier this week, Panthera President and Chief Conservation Officer Dr. Luke Hunter received photos from our partners at KopeLion with some astonishing content: the first-ever evidence of a wild lioness nursing a leopard cub.

Taken on Tuesday by a Ndutu Lodge guest in Tanzania’s Ngorongoro Conservation Area, the images show a 5-year-old lioness, known locally as ‘Nosikitok,’ suckling a leopard cub estimated to be just 3 weeks old.
Same-species suckling and adoptions for wild cats and other wildlife have been documented before, including the first ever wild puma kitten adoption captured on camera by Panthera. But cross-species nursing for wild cats—and all wildlife—is highly unusual.

“This is a truly unique case,” Dr. Hunter said. “I know of no other example of inter-species adoption or nursing like this among big cats in the wild. This lioness is known to have recently given birth to her own cubs, which is a critical factor. She is physiologically primed to take care of baby cats, and the little leopard fits the bill—it is almost exactly the age of her own cubs and physically very similar to them.

“She would not be nursing the cub if she wasn’t already awash with a ferocious maternal drive (which is typical of lionesses),” he continued. “Even so, there has never been another case like it, and why it has occurred now is mystifying. It is quite possible she has lost her own cubs, and found the leopard cub in her bereaved state when she would be particularly vulnerable.”

Even if Nosikitok continues to foster the cub, Dr. Hunter said, the obstacles to its survival would be formidable.

“It is very unlikely that the lioness’ pride will accept it,” he said. “Lions have very rich, complicated social relationships in which they recognize individuals—by sight and by roars—and so they are very well equipped to distinguish their cubs from others. If the rest of the pride finds the cub, it is likely it would be killed.”

But if the cub defied the odds and became independent—usually around 12-18 months for leopards—Dr. Hunter strongly suspects it would revert to behaving as a leopard.

“Even its early exposure to lion society would not override the millions of years of evolution that has equipped the leopard to be a supreme solitary hunter,” he said. “I am sure it would go its own way.”

We cross fingers that the cub does, indeed, defy the odds and survive.  Follow this link for more photos and information.