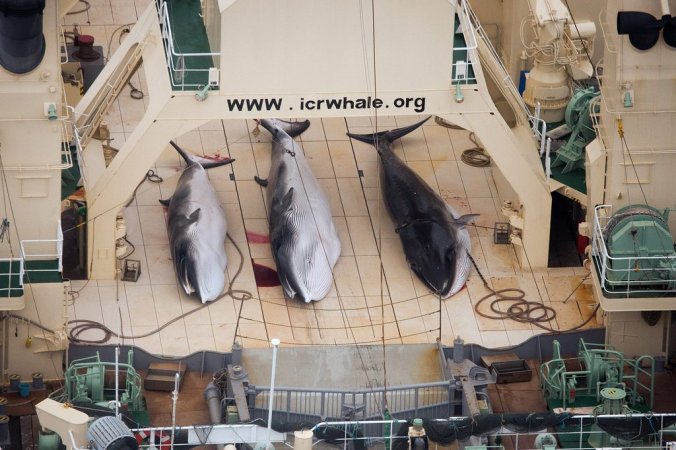 A photo from 2013, released by the environmentalist group Sea Shepherd, showing minke whales on the deck of a Japanese ship in the Antarctic. Japan says it will restrict whalers to its own waters as it resumes commercial whaling. Credit Tim Watters/Sea Shepherd Australia, via EPA, via Shutterstock

I had to read to the end to see Paul Watson’s name, and more importantly his proclamation on the significance of Japan’s withdrawal. It has been a long time since we have seen him or Sea Shepherd in our pages. My thanks to Daniel Victor and his employer for this important story:

Japan said on Wednesday that it would withdraw from an international agreement and resume commercial whaling, a defiant move to prop up an industry that still has cultural significance there, despite plummeting demand for whale meat.

Yoshihide Suga, Japan’s chief cabinet secretary, said the country would leave the International Whaling Commission, which established a moratorium on hunting whales that took effect in 1986.

The international agreement never stopped Japanese whaling, because it allowed the country to continue killing whales for scientific research while selling the meat. Critics considered the research a sham, little more than a cover for commercial whaling.

In recent years, Japan has had an annual quota in the Antarctic of 333 minke whales, which in the 2017-18 hunting season included 122 pregnant females. As part of its withdrawal from the international commission, Japan will stop its annual hunts in the Antarctic and limit whalers to its own waters. Commercial whaling will resume in July, Mr. Suga said.

Mr. Suga said the International Whaling Commission focused too much on conservation and had failed to develop a sustainable whaling industry, which is one of its stated goals.

“In its long history, Japan has used whales not only as a source of protein but also for a variety of other purposes,” Mr. Suga said in a statement. “Engagement in whaling has been supporting local communities, and thereby developed the life and culture of using whales.”

Whaling has long been abhorred by conservationists trying to protect the animals. Sam Annesley, the executive director of Greenpeace Japan, condemned the government’s decision.

“The declaration today is out of step with the international community, let alone the protection needed to safeguard the future of our oceans and these majestic creatures,” he said in a statement. “The government of Japan must urgently act to conserve marine ecosystems, rather than resume commercial whaling.”…